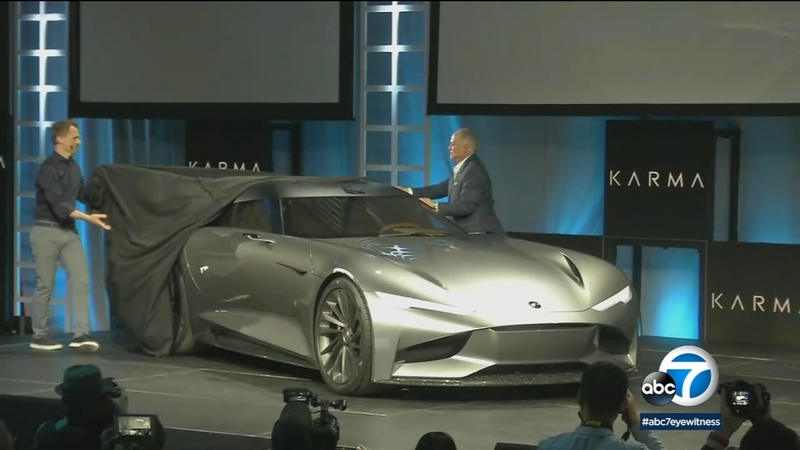 Technology is being shown off ahead of the L.A. Auto Show. Advanced cars and concepts from brands that haven't yet established a major toehold are taking the stage at AutoMobility LA.

For example, Karma. It's not exactly a start-up at this point, as it took over for a car company that went belly-up.

"We bought the company out of bankruptcy in 2014. And since that time, for the last five years, we have been 'on.' Very much on," said Joost de Vries, V.P. of global sales for Karma

Now, it's adding to its lineup with both extended range electric cars and fully electric ones, both emphasizing efficiency and looks.

"When people see our car, they ask questions. Where are they coming from? Where are they made? And those are some really interesting answers we have because they're made right here in Southern California," said de Vries. Karma is headquartered in Orange County, with manufacturing taking place at their factory in Moreno Valley.

Also trying to make a go of it in California is Faraday Future. The on-again, off-again luxury EV maker is on again for now. But earlier this year, it looked like Faraday Future didn't actually have much of a future. New management is reinvigorating the brand.

"Our biggest challenge right now is we have to get capital, and we have to do a fundraising process, which is more difficult now than it was before. Not only for Faraday, but for the whole industry," said Carsten Breitfeld, global CEO for Faraday Future.

Also making an appearance in L.A. is another zero-emission startup, Bollinger. With an SUV and a pickup truck, both battery powered, it could move from a niche player to something trendy. The company is taking deposits right now for deliveries starting in 2021.

It's not easy to start a car company from scratch. Just ask Tesla. But the new head of Faraday says to keep this in mind.

"And even if you look to great companies today like Apple, one of the most valuable and most successful companies of the world, they went through struggles at the beginning as well," noted Breitfeld.

One downside to Faraday Future getting back on its game so recently: it were not able to secure display space at the auto show. Both Karma and Bollinger do have displays at the convention center, and their products can be seen for the entire run of the show.
Report a correction or typo
Related topics:
automotiveauto industryla auto showcarsauto news
Copyright © 2021 KABC-TV. All Rights Reserved.
More Videos
From CNN Newsource affiliates
TOP STORIES