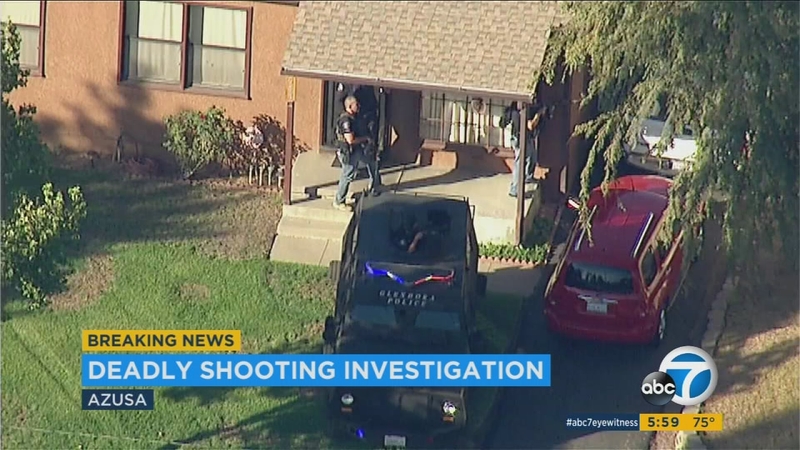 2 dead, including gunman, 2 others injured in Azusa shooting, authorities say

AZUSA, Calif. (KABC) -- A man who was "binging on cocaine" opened fire on random passersby in Azusa and ambushed police officers before he was killed in a gun battle Tuesday, officials said.

The gunman, identified as a 45-year-old resident of Azusa with a military background, killed a 77-year-old man and wounded two women, ages 59 and 65, who happened to be in the neighborhood when the shooting rampage began, Los Angeles County sheriff's Lt. John Corina said.

"His family says he starts binging on cocaine, kind of gets a little crazy and they can't control him," Corina said. "His wife and kids left last night to get away from him because he was getting out of control."

The man's binge continued Tuesday, Corina said. He also is a "gun fanatic" with a collection of firearms.

He came out of his home Tuesday afternoon and started shooting randomly at people on the street and in cars driving by, Corina said. One women was shot as she drove by in a van, which she crashed in front of the house. He then shot two other people on the street.

Shortly after 2 p.m., police were called to the scene on a report of shots fired in the 500 block of Fourth Street.

They found multiple victims "down," at the scene said Capt. Steven Hunt, acting chief of the Azusa Police Department.

The suspect had been hiding as the officers were attending to the victims. He then started shooting at them with an assault rifle and they returned fire, killing him, Corina said.

A massive law enforcement response followed, including SWAT teams and sheriff's helicopters, and the victims and the pinned-down officers were extracted to safety before it was confirmed the suspect had died at the scene.

Three wounded patients were transported from the scene, Corina said, and one, a 77-year-old man, died in an ambulance while en route to a hospital.

Corina described initial reports of a female shooter as "rumors flying around" and "misinformation going out."

"So far we have found no evidence of a female or anybody else assisting this person," the lieutenant said, referring to the deceased shooter. "But we are going ahead and following up on any information we're given."

The location was near Memorial Park, Mountain View Elementary School and Slauson Middle School, all of which were placed on lockdown. No one at the schools was hurt, according to the Azusa Unified School District. The campuses and the park were evacuated by police, Hunt said.

It was not certain if one or more of the victims was in the neighborhood to cast votes, as the victims were not in condition to be interviewed by officers, Corina said.
Report a correction or typo
Related topics:
azusalos angeles countylos angeles county sheriff's departmentactive shootershooting
Copyright © 2022 KABC Television, LLC. All rights reserved.
TOP STORIES
Newsom threatens to impose mandatory water restrictions
1 dead, 3 hurt after cliff rescue in Palos Verdes Estates
Lockdown lifted at Marine combat center after reports of shots fired
Man accused of attacking Chappelle says he was 'triggered' by jokes
What's causing liver disease in kids? Researchers float theories
Starbucks is leaving Russia for good
Johnny Depp, Amber Heard trial: Kate Moss expected to testify
Show More
Store workers fight off Huntington Beach smash-and-grab suspects
SCOTUS makes it tougher for prisoners to argue counsel was ineffective
Deadline arrives for LA County voters to register for mail-in ballots
Student says he was told not to mention 'Don't Say Gay' law in speech
Arkansas gov: Abortion ban should be revisited if Roe is overturned
More TOP STORIES News