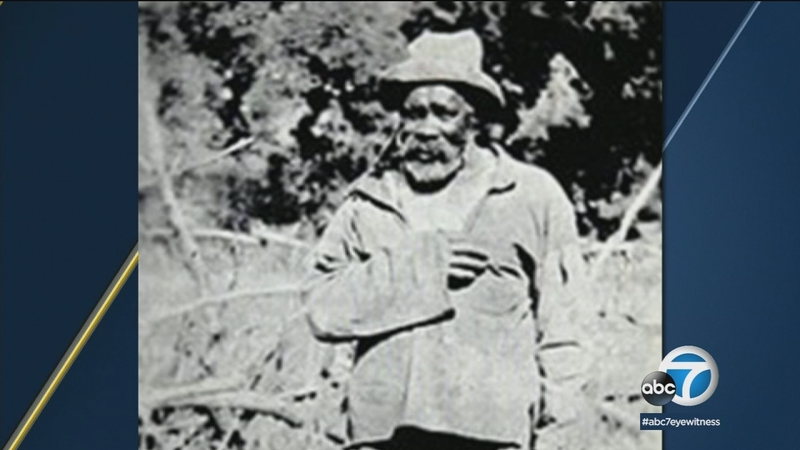 AGOURA, Calif. (KABC) -- You may have driven by the 2,000-foot volcanic peak in the Santa Monica mountains in Agoura without taking a second look, but next time, perhaps you'll want to share the story behind it: the story of John Ballard.

The former slave was the first African-American man to settle in the hills above Malibu. The pioneer built a home there in the 1880s with his wife, Amanda.

Ballard's story is one of perseverance, endurance and character.

Born into slavery around 1830, he made his way to California, finding success and wealth early on. He helped start the first African Methodist Episcopal church in Los Angeles, which still stands today.

However, he lost everything in the Great Depression and moved to the Santa Monica mountains to start over.

Though California was a free state by then, slavery still existed. Racism was a daily obstacle.

"Over the 20 years he was here, his house was burned down at least twice by folks who were hoping he would go elsewhere," David Szymanski with the National Park Service said.

That mountain where Ballard settled was dubbed Negrohead mountain - and the more offensive slur - for years.

It was even listed that way in official county records until family members reached out to former LA County Board of Supervisor member Zev Yaroslavsky and the effort to change the mountain's name was born.

Over the weekend, many of his descendants came together to mark Black History month and remember the man who started it all.

"The re-naming of Ballard mountain, I believe, not only helped to remove an egregious slur from the landscape, but made sure that the land preserves this story which is so important," Szymanski said.

Descendant Ryan Ballard said, "that mountain represents a man who considered himself an American when others called him something else."

Ballard's many descendants include a Berkeley-trained doctor who served in World War I and 93-year-old Reginald Ballard, a retired Los Angeles city fire captain who was a Tuskegee airman.