Sheriff Alex Villanueva says he intends to fire or suspend 26 deputies for misconduct related to a 2018 attack by the "Banditos" deputy gang in East LA.
KABC
By Carlos Granda and Lisa Bartley 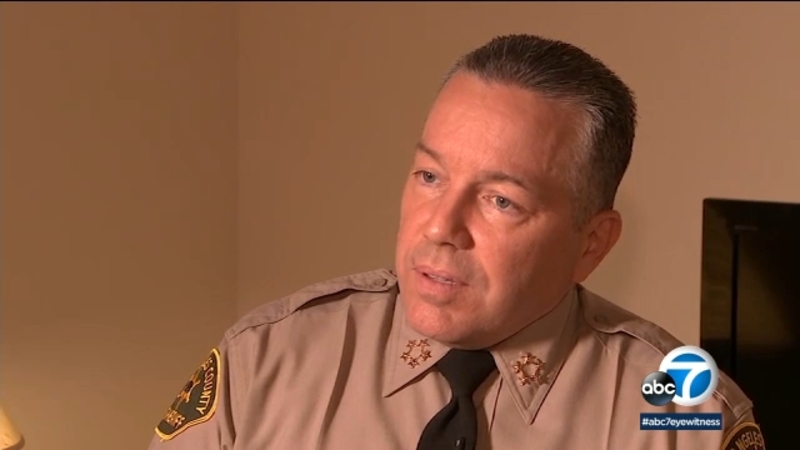 LOS ANGELES (KABC) -- Sheriff Alex Villanueva says he intends to fire or suspend 26 deputies for misconduct related to a 2018 attack by the "Banditos" deputy gang in East Los Angeles.

"We are now holding our employees accountable to the rule of law," Villanueva said. "I will not tolerate any group of employees that mistreats any member of the community or another member of the department - period."

The "Banditos" are a group of deputies that Villanueva admits ran the East Los Angeles patrol station at the time of the Kennedy Hall attack.

Members of the "Banditos" also bear tattoos of a skeleton in a sombrero with a shotgun.

"Vikings, Reapers, Regulators, Little Devils, Cowboys, 2000 Boys and 3000 Boys, Jump Out Boys and most recently the Banditos and the Executioners," said Matthew Burson, chief of the department's professional standard division. "I am absolutely sickened by the mere allegation of any deputy hiding behind their badges to hurt anyone."

In the fall of 2018, chaos broke out at an "off-training" party being held at Kennedy Hall by deputies from the East LA station.

"There's people getting, you know, stomped on... being choked out... it was just crazy, crazy to believe they're all cops," says one deputy who witnessed the melee and is part of a civil lawsuit against the LASD.

"There were some people who were shot-callers at the station," says Commander April Tardy, who notes that Internal Affairs investigators interviewed more than 70 people for the internal, administrative case.

"What the sheriff announced today, if they actually do it, will be historic," says Inspector General Max Huntsman. "The idea that they would, in all internal investigations of misconduct, actually ask about the possible gang affiliation would be a sea change."

But Villanueva says he will not ask all sworn personnel, including members of his own command staff, if they have tattoos.

"We are not going to go through a witch hunt and ask every employee - are you a member of a group or not," says Villanueva. "That would be inappropriate and wildly speculative."

Villanueva was Rafael Munoz's training officer many years ago at the East LA station, but told Eyewitness News last year that he trained all of his deputies, including Munoz, to act with dignity and respect.

Prosecutors noted that 21 deputies who may have witnessed the attack declined to be interviewed by the department's criminal investigators.

"There were 21 deputies who they chose not to force to talk," Huntsman said.

Huntsman said those potential deputy witnesses should have been compelled to talk to the criminal investigators under Sheriff's Department policy, but they were not.

"Absolutely, there should have been criminal action," says Miller who alleges that two of his clients were knocked unconscious in the attack.

The ACLU has joined the civil lawsuit. Aside from monetary damages, the lawsuit is asking the LASD and the county to voluntarily enter into a consent decree to enact systematic reform.

The notices to suspend or terminate those 26 deputies sets off a long process. The deputies have a right to hearings to defend themselves and that will take months, if not years.