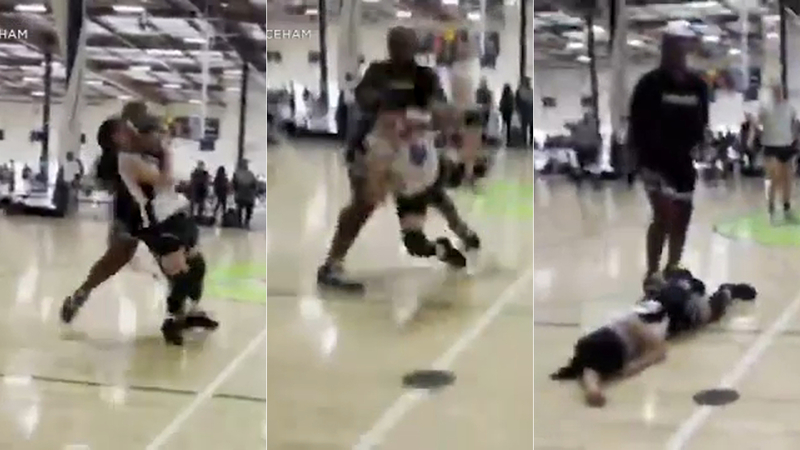 GARDEN GROVE, Calif. (KABC) -- An Orange County mom has filed a police complaint after her daughter was left with a concussion from a vicious sucker punch during a youth basketball game.

The shocking video shows a player catch Alice Ham's daughter Lauryn by surprise, swinging a wild roundhouse punch that smashes into her chin and throat, and knocks her to the floor.

Alice says her 15-year-old daughter is in concussion protocol and has not been able to attend school or focus on anything for days after the assault. She has been mostly staying in a dark room and just trying to rest.

"Of course I was in total shock," she told Eyewitness News. "Just couldn't believe that could happen to my child."

"You always see things on video and you never think it could happen to you. To actually see it and know that was my kid just hurt me so bad."

The incident happened during a girls' basketball tournament in Garden Grove over the weekend.

In the video, the other team's player takes and misses a three-point shot, then falls backward, knocking Lauryn down. The two get up and a few seconds after they head back down the court, the other girl charges over to Lauryn and takes the aggressive swing.

Eyewitness News has learned the girl who threw the punch is the daughter of a former NBA player.

Alice was watching her other children play when the assault happened. When she went to pick her up daughter, Lauryn had a bag of ice and needed to be helped into the car.

Alice says she believe the other player's mother provoked the attack.

"I can hear pretty clearly the mom (in the video). I know it's the mom because the witnesses at the site told me. It's pretty clear that she tells her daughter you have to hit her for that. What 'that' is, I don't know. I don't know what the mom thinks she saw."

Alice Ham has filed a report with local law enforcement but has not yet heard updates on the status of the investigation.

"I want the daughter and the mom held accountable," she said. "Because this type of behavior is reprehensible and cannot happen in youth sports."

"It can't happen outside of youth sports. If this was taken out of the context and it happens on the street, it rises to the level of assault and battery. This is exactly what it is. The mom incites violence upon my child. And that is never OK. I want the mom to be held accountable for her actions."

Eyewitness News is not identifying the girl who threw the punch, a juvenile.

Attorney Brett Greenfield, who represents the family of the teen girl who threw the punch, released a statement to Eyewitness News:

"My client and her family are deeply and sincerely remorseful. This is a unfortunate incident involving a very hard working and promising student athlete. We must keep some perspective and keep in mind that this is a young minor who has made a mistake."

"The comments on social media in response to this incident are a cause of great concern for both the minor and her family. We would respectfully request that she be given the benefit of the doubt and that her privacy be respected given her young age."