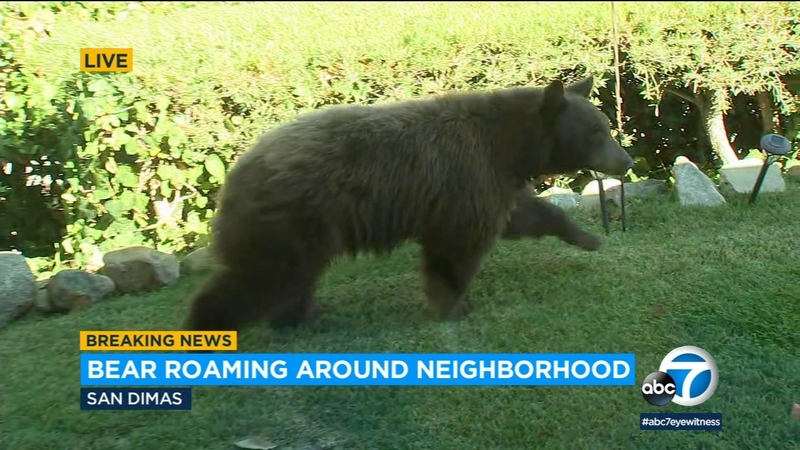 SAN DIMAS (KABC) -- A large bear that was seen roaming through a residential San Dimas neighborhood Wednesday morning was tranquilized and safely removed by wildlife officials.

The search began after a bear cub was seen on the grounds of a nearby elementary school. Shortly after 8 a.m., a school secretary at Shull Elementary School confirmed the campus at 825 North Amelia Drive was on lockdown due to concerns that the mother bear might be in the area.

The school was later reopened after the cub moved on to another area.

Los Angeles County sheriff's deputies responded as the adult bear strolled through front yards, backyards and along tree-lined streets several blocks away from the school. California Department of Fish and Wildlife were also summoned to the scene.

A large bear was seen roaming through a residential San Dimas neighborhood after an initial sighting of the animal prompted the temporary lockdown of a nearby elementary school.

At one point the bear reached up and grabbed a hummingbird feeder that was hanging from the roof of a house. It apparently tried to drink from the feeder before yanking it down to the ground. The animal later walked over to an aviary on the property and peeked in as birds fluttered about inside.

When the bear walked into a backyard near Gladstone Street and Dallas Road, residents inside a house were seen watching through a window and snapping photos with a camera.

Around 11 a.m., the bear was shot with a tranquilizer dart while up in a tree. An ABC7 crew later captured footage of the animal climbing back down the tree from a resident's living room.

Carrie and Bob Pouliot were excited to see the display of nature and said they did not feel any threat.

Once captured, the bear was loaded onto a pickup truck and was expected to be released back into the wild. The whereabouts of the younger bear cub were unknown.