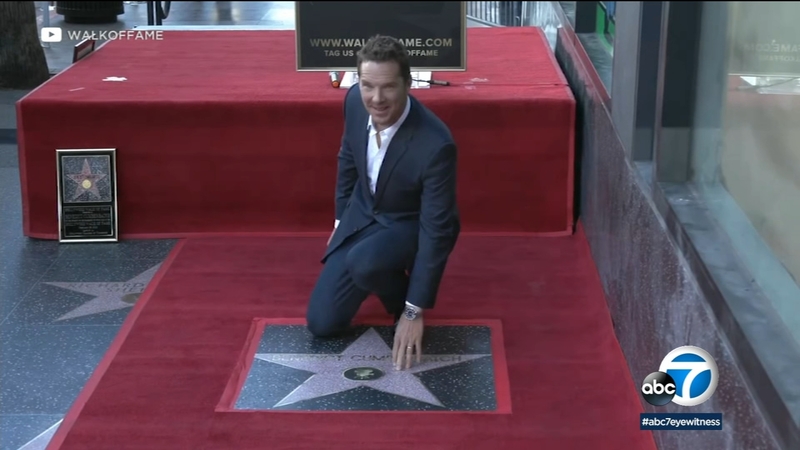 HOLLYWOOD -- Benedict Cumberbatch is nominated for an Oscar this year. But first another big honor came his way: a star on the Hollywood Walk of Fame.

"I was really nervous about this. It's outside of my wheelhouse in every regard!" a laughing Cumberbatch said at the unveiling ceremony, across the street from the TCL Chinese Theatre.

The actor may have been nervous about his new honor, but he played his part to perfection.

"I'm British so part of me is finding this incredibly painful," admitted Cumberbatch. "The other part of me is quite enjoying this massive ego stroke!"

Cumberbatch's career includes his Oscar-nominated work in "The Imitation Game" and his current nomination for "The Power of the Dog." His career now spans 20 years with some out-of-this-world roles along the way, like when he joined director J.J. Abrams in in the "Star Trek" universe.

Planning a trip to Avengers Campus at Disney California Adventure? Here's everything you need to know before you experience the new land.

"You were an amazing Hamlet. You were an incredible Sherlock Homes. You were the second best Khan ever, ever! You were brilliant in all of the iconic roles," said Feige. "But to us and to millions around the globe, you deserve this honor for being the first, the best, the greatest and the only Dr. Steven Strange."

Cumberbatch returns to that role this May in "Dr. Strange in the Multiverse of Madness." At his ceremony, Cumberbatch took time out to greet the many fans who'd gathered to celebrate with him. He also let his parents back in England know this star also belonged to them.

"They're both actors, you know, and this means something to them in a way that is relevant to their career and what they've done so beautifully throughout their entire life, as well as being a parent," said Cumberbatch.

He also brought Ukraine into the conversation, saying, as citizens of the world, we now need to act beyond just thoughts and prayers for the people there, and we can't stand back anymore.

Perhaps the day's most emotional moment came when Cumberbatch acknowledged his sister, who recently lost her battle with cancer.

"She would have loved the glitz and the oddness and the glamour. She would just have been laughing non-stop all the way through -- and probably crying. And I hope somewhere up there where the real stars shine, you are looking down on this moment right now. I'm sure you are," said Cumberbatch.