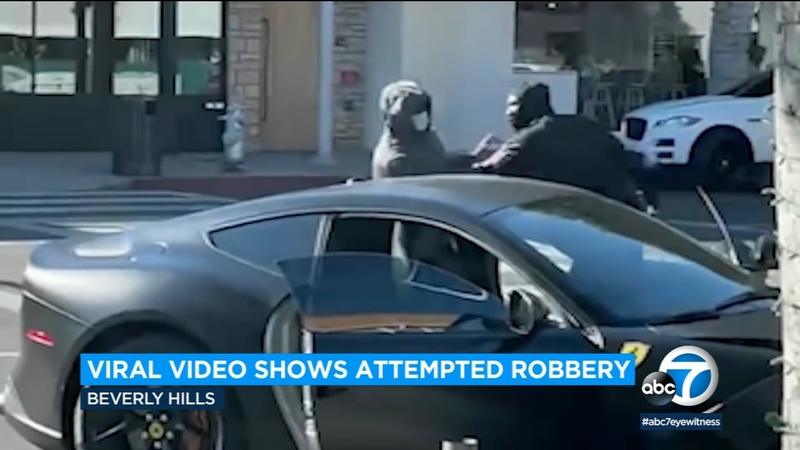 BEVERLY HILLS, Calif. (KABC) -- Two suspects are sought after they apparently ambushed and tried to rob the driver of a Ferrari of his watch during an attack in Beverly Hills Friday afternoon.

Beverly Hills police said officers responded to a report of a fight involving three men in the 200 block of S. Beverly Drive at around 3:09 p.m.

Police initially believed an attempted carjacking had occurred, but later determined the suspects had tried to rob the victim. One of the suspects was allegedly armed with a gun.

Video that has gone viral and which is part of a police investigation shows the two suspects punch and pistol-whip the man.

The suspects ran away, leaving the victim lying in the road.

The suspects were able to escape capture, despite police setting up a perimeter around the area.

"I want to reassure the community that all measures are being taken to keep our community safe. This evening, we have a full complement of police officers on high alert," Beverly Hills Police Chief Mark Stainbrook said in a statement after the robbery attempt happened.

The victim, who was attacked right beside his Ferrari sports car, appeared to have suffered minor injuries.

He fought back and prevented the suspects from taking his watch.

It's unclear if the suspects knew the victim.

Stainbrook said there will be extra patrol for the weekend.

Anyone with information on the incident is asked to contact the Beverly Hills Police Department at (310) 550-4951.