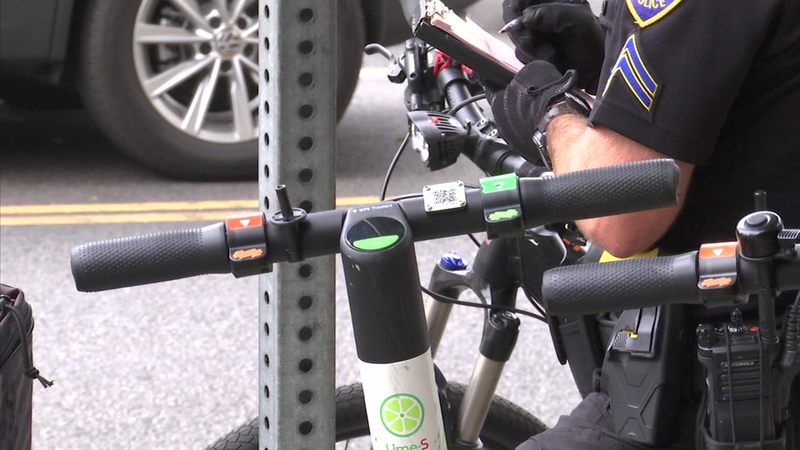 SANTA MONICA, Calif. (KABC) -- For months, riders of motorized scooters have traversed the Westside without helmets, often on the sidewalk, and some without drivers' licenses.

But as the alternative form of transportation has grown more popular and spread to other cities, enforcement is on the rise.

In Santa Monica Wednesday, a motorcycle cop pulled over Bird and Lime riders. Police waited for e-scooters to cross intersections and pounce.

"Nobody carries a helmet with them at all times. There's a breakdown. I thought about buying a helmet, but to have to carry it all the time," said scooter rider Gino Sesto, who received a ticket for not wearing a helmet.

Max Stamatakas takes scooters every day. He got a ticket because he doesn't have a driver's license.

"I did not have to put a driver's license to make the account, and I've taken maybe 100 rides over the past two months on this thing. I've never been stopped so it's kind of ridiculous I'm getting a ticket for something I didn't know was illegal. I think I should just be getting a warning if anything," he said.

The main violation Santa Monica police encounter is riders not wearing a helmet. The fine varies, but is usually between $100 and $200.

"Typically what happens if there is an accident, somebody's not wearing a helmet, not paying attention to the rules of the road, meaning if you're on an electric scooter, you have to stop for a red light, have to stop for a stop sign. Do it safely just like if you were in a vehicle. The fire department has to go to calls daily that has to do with these things," said Lt. Saul Rodriguez, with the Santa Monica Police Department.

Beverly Hills Police have begun impounding motorized scooters. Bird and Lime said they'll work with the city to adopt scooters which they said leads to fewer cars and less traffic.

Max Stamatkas, who will get his driver's license next month, said he won't let Santa Monica's enforcement stop him from taking his favorite form of transportation.