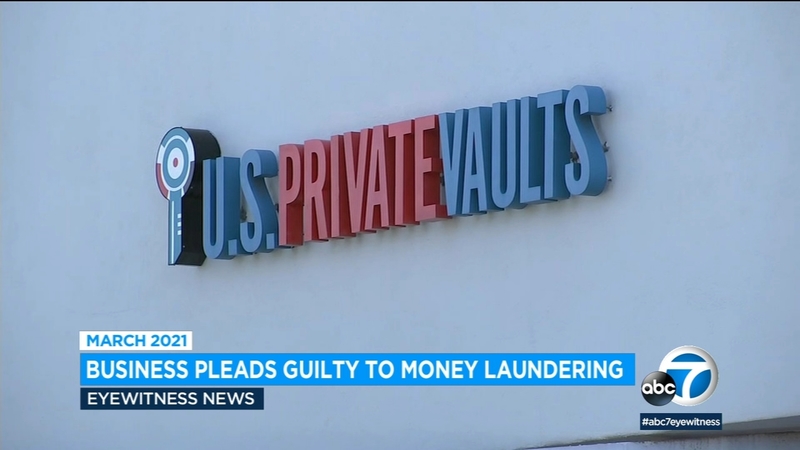 BEVERLY HILLS, LOS ANGELES (CNS) -- A Beverly Hills business that rented safety deposit boxes to customers who were not required to use their real identities will plead guilty to money laundering, admitting in federal court that it sought drug traffickers and other criminals as customers who often kept stacks of illegally obtained cash in their personal vaults, according to court papers
obtained by City News Service early Thursday.

U.S. Private Vaults, a Nevada-based company that operated on West Olympic Boulevard, was raided by the FBI and the U.S. Drug Enforcement Administration in March 2021. Agents broke open boxes, seizing drugs, firearms and large amounts of gold bullion and cash, as well as other valuables, from about 396 of the rented deposit boxes, according to an indictment alleging three separate conspiracies to violate federal law.

Until the plea agreement was filed late Wednesday, the federal government has remained silent about its case against the business, whose owners or board of directors have not been charged or named.

The company admitted to having recruited as its customers drug traffickers and other criminals "who paid over $550,000 in cash and bitcoin in exchange for the anonymous use of safety deposit boxes to store the proceeds of their offenses, most often in stacks of $100 bills,'' according to the agreement filed in Los Angeles federal court.

Box rental payments were made to U.S. Private Vaults with the company's knowledge that the money came from the proceeds of the distribution of controlled substances and other crimes, the plea agreement states.

The company would deposit the cash with banks, using the money to pay its costs for maintaining the business, thereby promoting the distribution of controlled substances and other crimes by its customers, federal prosecutors wrote.

A date has not yet been set for the now-defunct business to formally plead guilty through its attorney to the charge of conspiracy to launder money. A status conference is scheduled for March 21.

The plea agreement states that U.S. Private Vaults gives up its right to appeal its sentence provided the court imposes a fine of no more than $5 million, a probationary sentence of no longer than five years, and an order of restitution of $10 million or less.

The plea agreement was signed by both a federal prosecutor and vault attorney Michael Singer in November but kept secret until Wednesday.

Box holders seeking the return of their property alleged that the government overstepped constitutional protections in efforts to uncover illegal activity. About $86 million in cash and millions more in jewelry and other valuables were reportedly seized from the rented boxes, but specific criminal conduct has not been alleged against customers.

In the indictment, Los Angeles prosecutors allege that U.S. Private Vaults adopted "business practices that attracted customers in possession of proceeds from criminal offenses, including drug trafficking'' and other crimes.

U.S. Private Vault customers were not required to use their names to access their boxes. Instead, the company used iris scans and other means to keep client identities secret.

The warrant authorizing the raid on U.S. Private Vaults stated that it "does not authorize a criminal search or seizure of the contents of the safety deposit boxes,'' according to Rob Johnson, senior attorney with the Institute for Justice, which filed suit for the return of box contents on behalf of clients.

Despite the direction of the judge who signed the warrant, "the FBI opened every box in the vault and forced individuals to prove their own innocence to get their property back,'' Johnson said.