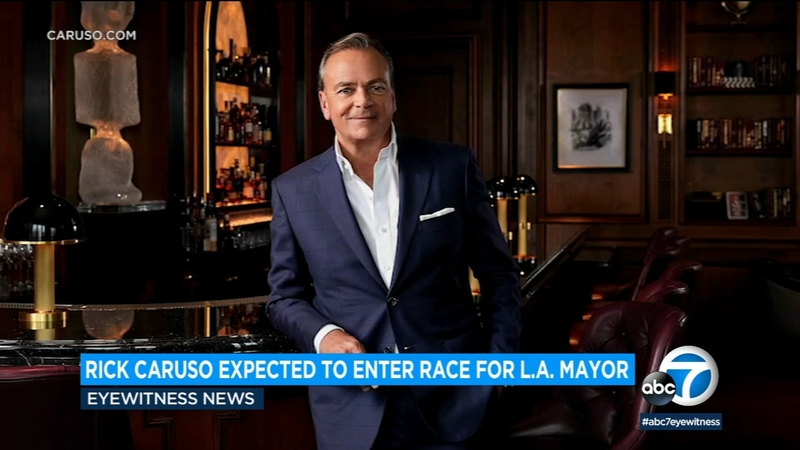 "It's a very meaningful day for me and my family," Caruso said. "I love Los Angeles, I love the diversity of Los Angeles. I'm eager to be a part of this."

Caruso's run should come as no surprise. He'd been hinting he'd run for months.

"We've seen before candidates, developers, wealthy people, come in and attempt to, as dilettantes, convey that they can be public servants for the first time," Feuer said. "And voters always see through that."

It is a crowded field for L.A.'s highest office.

L.A. City Councilman Kevin de León jumped into the race last September. On Friday morning, he criticized Caruso as out of touch with the electorate and beholden to the rich.

"Do we want to live in a city that only works for the super wealthy and the elite?" De León asked. "Or do we want a city that works for us working people, people in the middle class?"

Congresswoman Karen Bass is another high-profile candidate for mayor, willing to give up her seat in the House of Representatives, she says to focus on L.A.'s homelessness crisis.

L.A. City Councilman Joe Buscaino was one of the first to enter the mayor's race. He attacked the 63-year-old billionaire, linking him to L.A. County's embattled District Attorney George Gascón.

"Rick Caruso hosted an elite, star-studded fundraiser for District Attorney George Gascón," Buscaino wrote in a news release. "Mr. Caruso and his family donated thousands of dollars to the election campaign of George Gascón. Mr. Caruso may regret that now, but it's too late."

Caruso is a Los Angeles native, who earned his billions developing shopping centers like The Grove and The Americana. He has reportedly been working with a high-profile political consulting firm since October.

Last month, Caruso changed his voter registration to Democrat after nearly a decade registered as independent.