Hundreds of people marched through downtown Los Angeles in a Black Lives Matter protest over the death of George Floyd in Minnesota.
KABC
By ABC7.com staff 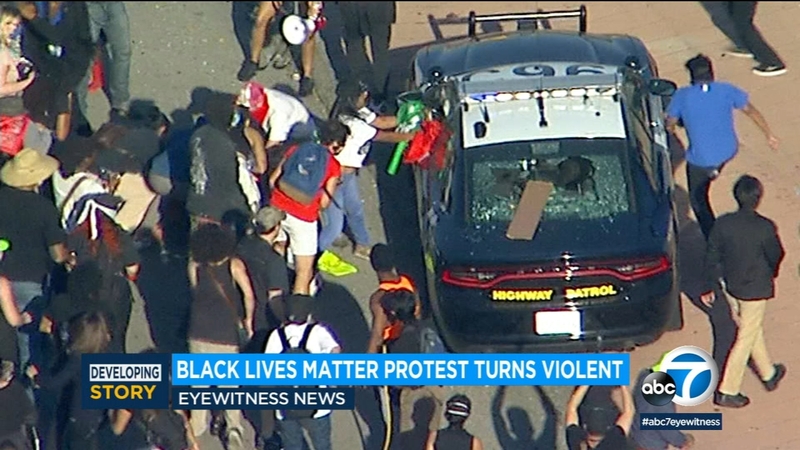 DOWNTOWN LOS ANGELES (KABC) -- Hundreds of people marched through downtown Los Angeles in a Black Lives Matter protest over the death of George Floyd in Minnesota.

The march resulted in a violent confrontation with police, including the smashing of CHP cruiser windows, and the shutting down of the 101 Freeway near downtown.

An estimated 500 to 1,000 people participated in the event, starting near City Hall and then marching through downtown.

Black Lives Matter protesters surrounded a police car and smashed a back window during a demonstration in Los Angeles.

It appears the event was not cleared with city officials in advance as there was a minimal police presence in the area.

At one point, dozens of protesters wandered onto part of the 101 Freeway near downtown and surrounded a CHP cruiser.

The cruiser tried to escape the crowd and someone smashed the back window with a skateboard.

As the CHP car tried to flee, a man rode on the car's hood for a few seconds, then fell off and appeared to hit his head as he fell to the ground. He then remained motionless as a crowd gathered around him.

A second CHP vehicle tried to assist and was also surrounded and had its window smashed. That vehicle also left.

Authorities were later able to get the crowds off the freeway.

Crowds were blocking downtown streets in the area of Temple and Los Angeles streets as they carried signs and stood still in the intersection.

A protester at the Black Lives March in downtown Los Angeles talks about how disturbed he was at the death of George Floyd in Minnesota.

The march was a reaction to the death of Floyd and video showing an officer placing his knee of Floyd's neck while he was handcuffed on the ground.

"George Floyd was killed before our eyes - and we have every reason to be angry, to cry out for justice, to say never again," he wrote.

Angelenos should follow their conscience in response to the pain and senselessness of this horror. I will always believe in expressing ourselves powerfully, peacefully, and safely.

Protester Wesley Smith talked to Eyewitness News on Wednesday about how disturbed he was about seeing the disturbing arrest footage.

"When I saw the video of George Floyd getting murdered in cold blood, I've never felt anything like that in my life, man," he said. "To know there's so many people just trying to do the right thing and just make a life and live, and the police brutality that continues to happen to black people over and over in this country is unacceptable."

Smith also lashed out at the police's response to the protest in downtown L.A.

"To be out here in this peaceful protest and they have riot gear and rubber bullets like we're terrorists? It's not right. We're sick of it. No justice, no peace."

Tensions remained high throughout the evening.

"We all really are like victims of this. And when it really comes down to it, it's really like, you're a citizen, you're a civilian. This is happening to civilians, you know?"

Some in the crowd were also seen burning an American flag. The LAPD and Chief Michel Moore issued statements expressing sympathy with the protesters' cause and asked them to demonstrate peacefully.

"Earlier we saw people on the streets of Downtown L.A., at times going onto the 101 freeway, to protest the death of George Floyd," the LAPD tweeted. "We hear your anger & your pain. We will always facilitate freedom of speech. Period. All we ask is that protests are held in a safe & legal manner."

Earlier we saw people on the streets of Downtown L.A., at times going onto the 101 freeway, to protest the death of George Floyd.

We hear your anger & your pain. We will always facilitate freedom of speech. Period. All we ask is that protests are held in a safe & legal manner.

Authorities said no arrests were made, and for the most part, the protest was peaceful.

"We're here to maintain everyone's freedom of speech, and to protect everyone's rights, but we also want to make sure nothing happens to the individuals," LAPD Sgt. Frank Preciado said.

At the start of the protest, the crowds were packed tightly together, with few people observing physical distancing. The use of masks appeared to be inconsistent.

The crowd began thinning out later in the evening and no other incidents of violence were observed. LAPD said CHP will determine if any charges will be pursued for the damage to the two patrol vehicles.

The video that was shared online shows the man pleading that he couldn't breathe.