Turning tragedy into hope: An OC family's mission to 'Blaze It Forward' with kindness

The Bernstein family is fighting hate with love -- with a newfound purpose and mission to keep Blaze's spirit alive by inspiring others to do good.
KABC
By Jessica Dominguez 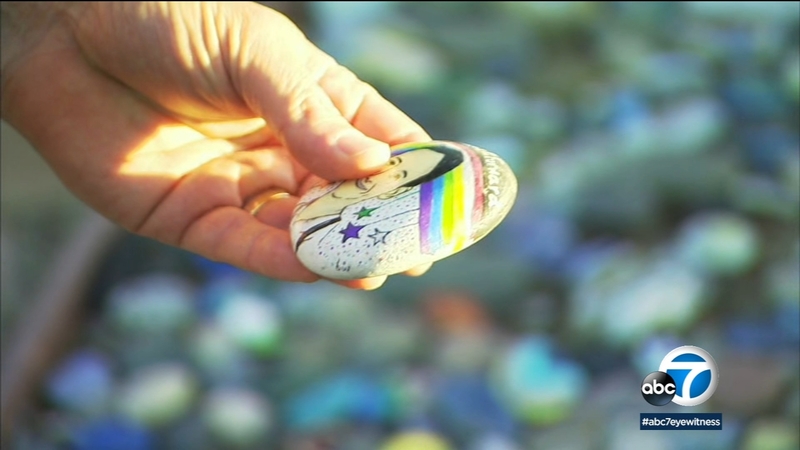 Family on mission to 'Blaze it Forward' with kindness

Gideon and Jeanne Bernstein are the parents of Blaze Bernstein, a 19-year-old "renaissance man" who was tragically murdered in January 2018 in Foothill Ranch while home for winter break from the University of Pennsylvania. They believe their son was killed because he was gay and Jewish.

Since then, the Bernsteins set their lives on a new path dedicated to spreading awareness on LGBTQ+ issues, community service and inspiring people worldwide to do acts of kindness in honor of their son.

On a recent beautiful day, Gideon and Jeanne, met ABC7 to share their son's life story. They choose to do this at a memorial site established by the community as a tribute to their late son.

Located at Borrego Park in Lake Forest of Orange County, the stone-filled memorial is made up of hand-painted and specially designed rocks brought by family, friends and strangers from around the world who come to honor Blaze's life.

The Bernsteins also brought symbolic rocks from a trip to Israel that their family had taken when Blaze was alive. On this trip, Gideon says the guide spent some time talking to his children about the biblical story of David and Goliath. Blaze was so inspired by the story that he decided to bring back some of these special rocks back home -- vowing to someday create a mosaic with them.

That day never came, but his parents brought the rocks for him and added them to his memorial mosaic.

"When these rocks started to come to us from all over the world, I felt like we weren't alone," said Jeanne.

"It just reminds you how beautiful humanity really is," said Gideon.

They realized early on that you cannot fight hate with hate, so in mid-2018 Gideon and Jeanne decided to create Blaze It Forward, a campaign to do good things and inspire people to do intentional acts of kindness.

What began as a resource Facebook page for the family to gather information in the days following Blaze's disappearance, soon turned into a page focused on the movement with thousands following and contributing through kind acts.

The Bernsteins participated in their very first Pride parade in 2019. In honor of their son, the Orange County Pride parade was also renamed to the Blaze It Forward OC Pride LGBT Parade.