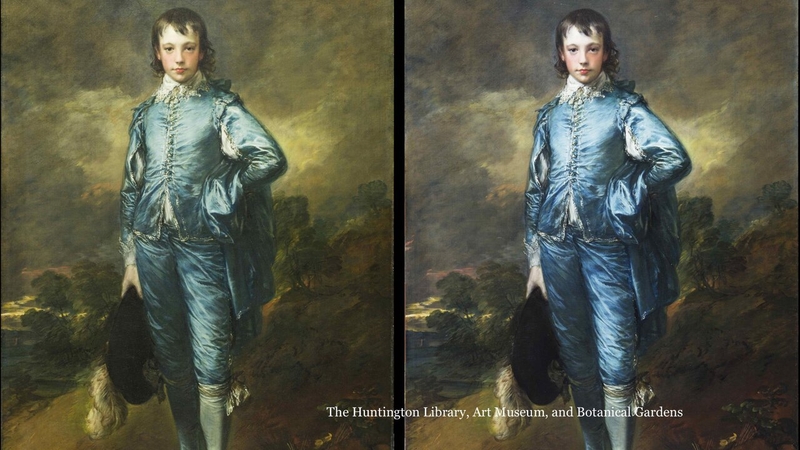 Facelift complete for The Blue Boy at the Huntington Museum

SAN MARINO, Calif. (KABC) -- The Huntington Art Museum's "Blue Boy" is back on display after an extensive cleanup - but the gallery is closed for the pandemic and visitors are not allowed.

Even a 250-year-old painting has fallen victim to the COVID-19 pandemic. Under normal circumstances, the Thornton Portrait Gallery would be filled with visitors anxious to see a refreshed rock star of the art world. But museums are still closed.

Project Blue Boy began three years ago, when senior painting conservator Christina O'Connell went to work using high-tech techniques to assess what could be done for the painting

In total, she would end up spending 500 hours going over every brushstroke on Thomas Gainsborough's 1770 masterpiece.

"Gainsborough painted the painting relatively quickly. It's hard to say exactly how much time he took, but there's a lot of quick-looking brushstrokes on the surface," she said.

She added: "It's probably safe to say at this point that I spent more time working on the treatment of the painting than Gainsborough did painting it."

Melinda McCurdy, associate curator of British art said, "I think that what we've done is really bring it back closer than it's ever been since it first exhibited in 1770 when Thomas Gainsborough showed it at the Royal Academy of Arts."

She says this was Gainsborough's breakout work.

"People can now really see why it was such an exciting work of art. He painted it to be his sort of masterpiece calling card."

The artist's calling card should not be going off exhibit again for a long time.

O'Connell said, "The goal is to preserve the painting and not require treatment again for quite a long time. It's hard to say an exact number of years. We hope it lasts at least until the next generation of conservators before any new treatment would be needed."

Hours of the work were completed on public view. Close inspection revealed the Blue Boy was painted on a recycled canvas which was ripped sometime before Henry Huntington bought the painting in 1921. It was so well repaired nobody knew until now.

With the high-tech equipment used in this conservation process, the Blue Boy gave up a lot of secrets.