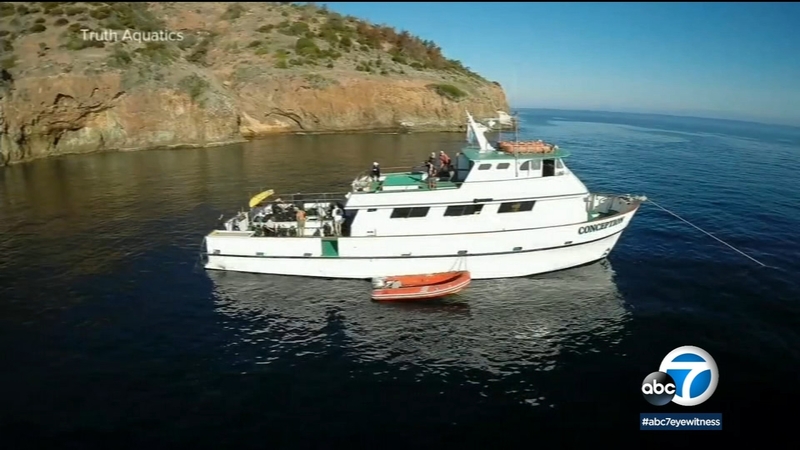 SANTA BARBARA, Calif. (KABC) -- As the investigation into what caused the fatal dive-boat fire off the coast of Santa Barbara last week continues, one experienced diver who has been aboard the Conception wonders whether lithium batteries on the vessel may have sparked the blaze.

Former passengers like Lance Zimmer, who had recently gone on a dive trip aboard the doomed vessel, are stunned by the tragedy.

"I just couldn't believe it. They've had a great track record that's why this event came as a real shock," Zimmer said.

Authorities say the 34 victims appear to have died from smoke inhalation. All of them were asleep in their bunks below deck when the blaze started. Five crew members managed to escape the flames, while one crew member perished.

RELATED: Owner says crew 'had no choice but to evacuate the boat'
EMBED More News Videos

The owner of the diving boat that was engulfed in fire off the coast of Santa Barbara says the crew tried desperately to save the passengers trapped by flames.

Zimmer says he wonders if highly flammable lithium ion batteries may be to blame. Many things inside dive boats typically run off of the batteries, such as dive computers and underwater cameras.

"Everybody had phones, cameras. We didn't all have our own personal stations where we could charge stuff so there were kind of central areas with power strips. And they were a bit of a mess," he said.

He says many of the electronics were charged near the galley, close to the stairs and the only access below deck. Zimmer says he can't believe so many lost their lives in such a horrific way.

"I thought there were going to be more survivors. Then as I continued to be glued to every news story that came out, the reality came into focus that this was just utterly tragic," Zimmer said.

RELATED: Investigation will take more than a year, NTSB says

Weather forced an early end to salvage and recovery efforts over the weekend and weren't set to resume until later this week.

Federal investigators say the ion lithium batteries are one of the many factors they are looking into as a potential cause of the fire, an investigation they say could take up to 18 months.