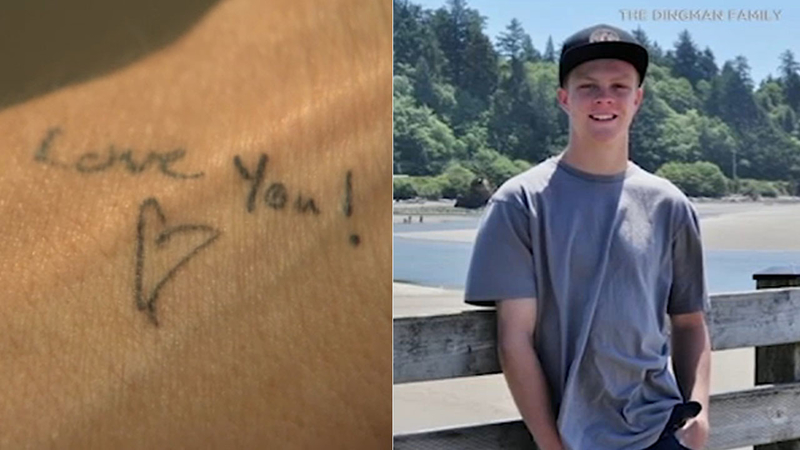 THOUSAND OAKS, Calif. (KABC) -- The Dingman family wants everyone to remember their 21-year-old son Blake - and never forget what happened nearly one year ago this Thursday.

On Nov. 7, 2018, a gunman entered the Borderline Bar and Grill in Thousand Oaks and opened fire killing 12 people, including Blake.

"I hope the whole community realizes that there are no guarantees for tomorrow," said Dan Dingman, Blake's father, trying to hold back tears. "We never thought this would happen. It did."

More than 200 people were inside Borderline that night.

Blake was there with friends.

His mother Lorrie said Blake was the life of the party. "He always had a smile on his face."

His parents said Blake, an electrician, was excited about working with his family after Dan and Lorrie started their own construction company.

From an early age, he would work with his father and grandfather on projects, including helping restore a 1931 Ford. His family said Blake loved working on his truck and had a knack for figuring out anything mechanical.

He was extremely close to his family. Lorrie said his grandparents, who lived a mile away, thought that was too far and bought a house across the street to be closer after Blake was born.


"The ideal big brother" is how younger brother Aidan described Blake. He would mirror what his brother did, from Pony baseball to performing stunts on the half pipe at home.

"Off-roading and motorcycles, trucks - we all did the same thing," said Aidan, 19, who's also working in construction.

"He was really good at sports," said Lorrie. "He did soccer, baseball, BMX."

He was also a gifted artist and made friends easily.

"He was such a giver," said Dan. "He would do anything for anybody, no matter what time."

His mom said his friends still visit and that's comforting.

"I can imagine that Blake is still here," said Lorrie, through tears. "So for that moment you have a little joy and then you realize he's not here."

Nov, 7 at 11:24 pm, Lorrie said she received a phone call from one of the two friends who had been with Blake at the Borderline.

"They had walked out and said goodbye to them and they walked right past the shooter," recalled Lorrie. "Then they heard the shooting start."

Lorrie, Dan and Aidan rushed to the scene.

We interviewed Aidan that night, as he turned to the media to try to get any information on his brother because he wasn't answering his phone.

Blake's friend Jake Dunham also died that night. The two were remembered at one memorial. Hundreds also made the trek to Ridgecrest for the unveiling of two benches in the desert where Blake and Jake loved to off-road. The memorial includes all the Borderline victims.

One of his messages from a handwritten note that reads "Love You!" with a heart drawn underneath it is tattooed on Lorrie's arm.

One year later Lorrie said she still cries every day.

The family's view on life is also different now.

"The guy who cut you off on the freeway - doesn't matter," added Dan.

Lorrie had wrist bands made with the first initials of each of the 12 victims. She said she hoped it would remind people to be kind to others.

"When they see that band on their arm," said Lorrie. "I hope that reminds them to do something good for someone else."

The family hopes the tragedy will encourage parents to teach their children about compassion.

"Somebody who didn't care about others," said Lorrie. "That's what killed my son."

Other lessons learned: "You can never take too many pictures," said Dan.

"That's all you have left," added Aidan. "Cherish every moment."

The Dingmans said their faith, family and friends give them strength.

"The community has rallied around all 12 families," said Lorrie. "They've been really amazing to us."

They hold on to the motto found on a sign on display at the Pony baseball field at Dos Vientos Community Park in Newbury Park, dedicated in memory of Blake. It has his jersey No. 15 on it.