There's a plan to sell most of the property to a developer who would put in single-family homes.
KABC
By Carlos Granda 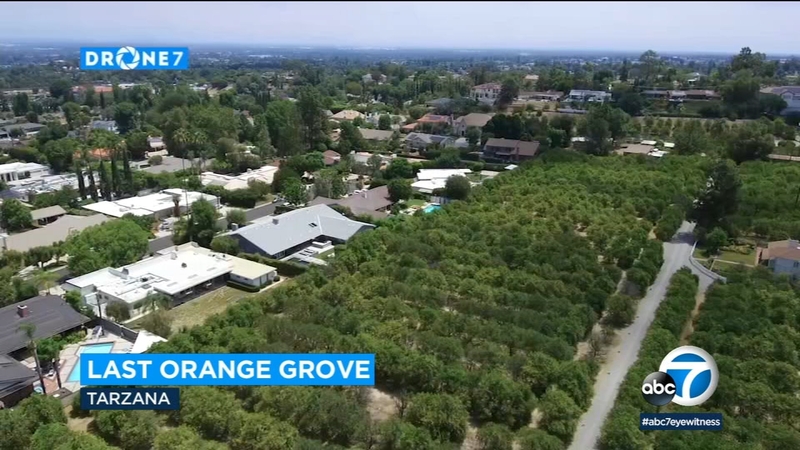 The Bothwell Ranch, which is on the border of Tarzana and Woodland Hills, is the last orange grove left.

"We want to keep it intact and not lose it," said Rob Hollman with Bothwell Ranch Foundation. "We're talking about 2,000 trees here."

All of that could change.

There's a plan to sell most of the property to a developer who would put in single-family homes.

"This is it," he said. "This is the last commercial farm in the valley. This is agricultural land, so they have to go and change the zoning, which is a whole other process. It's a lot easier to keep it."

The original owners the Bothwell family bought the property in 1926.

Over the years, pieces have been sold off and is now about 14 acres - 10% of its original size.

The Bothwell Ranch Foundation said it tried to work with the family to be able to buy the property.

It said it would have been a partnership with the state, the city and the Santa Monica Mountains Conservancy.

"The state said they don't have the money," said Hollman. "They couldn't do it within. This is after months and months and talking with them and knowing how much it would cost to do this."

Meanwhile, Councilman Bob Blumenfield said there is a proposal to set aside part of the property and keep it undeveloped.

"We would get a third of the land donated and dedicated in perpetuity to preserve that land and preserve the history," said Blumenfield.

However, Mallel feels that's not enough and hopes to preserve all of it.

"I'm just not one to throw my arms in the air and say, 'Congratulations,'" he said. "We achieve something when it's not really an achievement. Saving four acres is a blip."