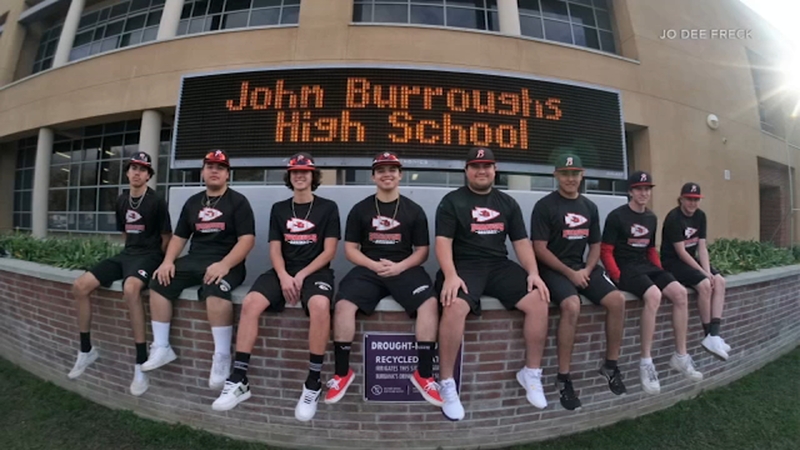 The pictures were taken in January as part of a two-decade tradition for varsity seniors on the baseball team to take a photo together for the yearbook.


The moms of the athletes organized the photo op, which ended up on social media.

The Burbank Unified School District saw the picture and punished the players for violating COVID-19 safety protocols - not wearing masks and not following proper social distancing.

The entire varsity baseball team was suspended from organized practice or conditioning drills for a week and all eight seniors on the team were suspended for two weeks.

"The district and board members decided, or they tried to cancel the whole varsity season as a result of the pictures," said Rory Freck, a senior on the team. "But our athletic director and coach fought for us, and they compromised on a two-week suspension instead."

After Orange County was given the green light to resume youth sports, the varsity and junior varsity baseball teams at Santa Ana High School held their first practice Friday.

The district superintendent issued this statement: "I have decided to delay the return of athletic conditioning for the JBHS baseball team by one week so that the team can review health guidelines and safety protocols. I look forward to the team beginning conditioning on Monday, safely."

Rory's mother, Jo Dee Freck, says: "I'm very disappointed that our kids are being punished for something that the moms arranged. And I understand that there are COVID protocols, but the boys were just trying to make us happy."

Parent Brian Nichols is outraged with the district for suspending his son and a dozen other underclassmen on the varsity team who were not involved with taking the picture.

"It's an egregious abuse of power," he said.