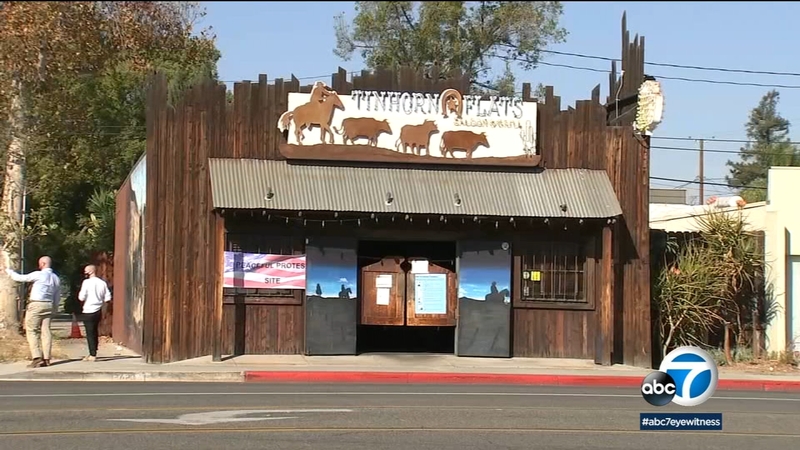 BURBANK, Calif. (CNS) -- Tinhorn Flats Saloon & Grill, the Burbank eatery that became the focus of a battle over coronavirus restrictions, has been sold to a new owner, city officials announced.

The sale and escrow closed Tuesday on the property at 2623 Magnolia Blvd. in Burbank. The price paid for the property was not known.

The seller -- Isabelle Lepejian, the ex-wife of the previous owner -- is no longer the owner of record. The new owner of the property was listed as Old Fashioned Investment, LLC.

The fence that was placed around the location was scheduled to be removed Friday, according to city officials. Burbank has yet to receive an application for reuse of the property.

A popular sports bar in Burbank is defying Gov. Newsom's order to close outdoor dining, saying he feels he's run out of options with no relief money coming in and bills still due.

Isabelle Lepejian last month obtained possession of the Burbank restaurant and successfully completed an eviction process she initiated against the eatery. She was formerly married to restaurant owner Baret Lepejian and is the mother of 20-year-old Lucas Lepejian, who was arrested by Burbank police for being on the property when he was allegedly not permitted to be there and often railed against the COVID-19 health mandates affecting the business.

The eviction was separate from actions taken by Los Angeles Superior Court Judge Mitchell L. Beckloff, who imposed a preliminary injunction and levied $1,150 in sanctions against Barfly Inc., the operating company for Tinhorn Flats, on April 9 due to the eatery's lack of proper operating permits.

Earlier this year, the Los Angeles County Department of Public Health revoked Tinhorn Flats' health permit and its conditional-use permit was subsequently canceled by the Burbank City Council. The preliminary injunction required the business to stay closed until it obtained the legally required permits to reopen.

Baret Lepejian, who lives in Thailand while his children operated the restaurant, previously said he supported their actions amid the pandemic and vowed not to pay the roughly $50,000 in fines levied against the business.