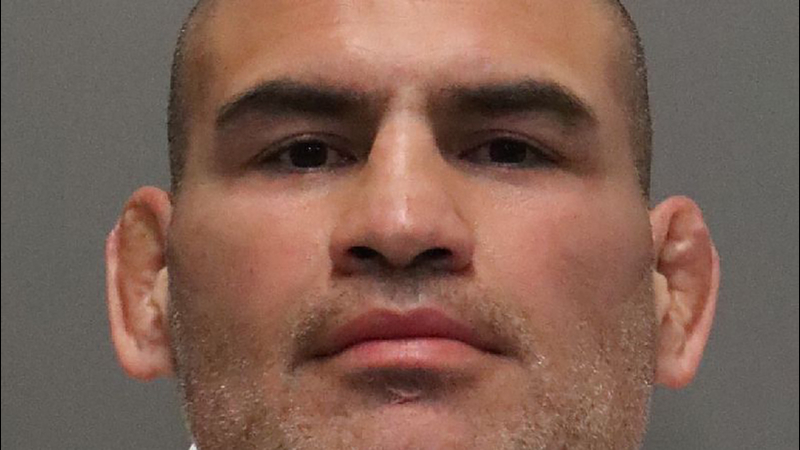 SANTA CLARA COUNTY, Calif. -- Court documents are revealing a possible motive in the San Jose shooting on Monday that led to the arrest of Cain Velasquez. The former UFC champion is accused of shooting into a car, aiming for a man accused of molesting a child relative, but hit someone else.

The man, who was in the car with two others at the time, was taken to the hospital with non-life threatening injuries after the shooting.

According to the court documents, the target of the shooting - 43-year-old Harry Goularte - is facing felony charges for reportedly molesting a child who is a close relative of Velasquez. He was unharmed in the shooting, authorities say.

Goularte was arraigned in Santa Clara County Superior Court on Feb. 25. He was released under the conditions that he stay on house arrest in Morgan Hill, stay 100 yards away from any child under 14, and wear an electronic monitoring bracelet.

He was on his way to get the monitor when Cain attempted to shoot him, according to authorities.

Goularte's male relative, 63, was struck once, but is expected to survive.

Velasquez is now in jail, charged with attempted, premeditated murder, and other related charges.

This is a breaking news update. An earlier story can be found below.

Former UFC Champion Cain Velasquez was arrested in connection with a shooting that happened Monday in San Jose, police said.

A man was taken to the hospital with non-life-threatening injuries after the shooting near Monterey Road and Bailey Avenue.

SKY7 was over the scene on Monday, showing several police vehicles around a pick-up truck that had all of its doors open on the side of the road.

Combat Sports Reporter for ESPN Marc Raimondi shared his thoughts on the arrest with ABC7 Tuesday after he had gotten to know Velasquez well following a decade of covering the heavyweight fighter.

Learning the news that Velasquez is now in jail suspected of attempted murder is something he never would've considered.

"MMA is a sport that has a lot of characters, a lot of people from all different walks of life," Raimondi said. "There are some people that get in trouble a lot, Cain Velasquez was never that type of guy. Cain Velasquez is not the kind of guy you expect to be involved in something like this."
Police arrested Velasquez and the Salinas native was booked into Santa Clara County Jail where he is being held with no bail.

The arrest is being felt throughout the UFC community as well as with fans.

Fans we spoke with who didn't want to appear on camera described Velasquez as a family man who was loved by many.

"Complete shock and surprise," Raimondi said. "I've seen many people say of all the people in this sport, Cain Velasquez, that's a shocking name to be involved in something like this."

Velasquez is one of many major UFC fighters to train at American Kickboxing Academy in South San Jose, a location just a few miles away from where yesterday's incident occurred.

Velasquez denied our request for interview from jail and will have his first court appearance Wednesday at noon.

The 39-year-old Velasquez is a former two-time UFC heavyweight champion. He retired from fighting in 2019.