CSUN tennis players, one from Russia, one from Ukraine, strengthen friendship in face of war 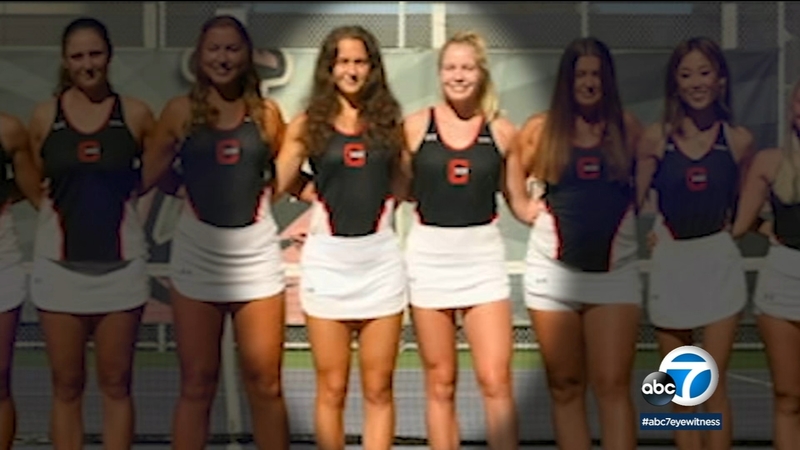 NORTHRIDGE, Calif. (KABC) -- Russia's invasion of Ukraine is having world wide repercussions well beyond the two countries, and often in small unexpected ways. It's even touched the Cal State Northridge tennis team.

Yuliia Zhytelna and Ekaterina Repina have spent most of their lives on the tennis court.

The two women are members of the California State University-Northridge tennis team and even though Zhytelna is only a freshman and Repina is a senior, the two have been paired up as doubles partners right from the get-go, both on and off the court.

"We do all of our activities together," said Repina. "We hang out outside of tennis all the time."

But what makes this partnership even more interesting is where these two athletes hail from. Zhytelna is from Ukraine. Repina is from Russia. Their two countries are now entwined in a deadly war.

"We just started talking and got the support from each other," the 18-year-old Zhytelna said. "We don't have tension between us."

"We're just trying to calm each other down and say 'Everything is going to be alright,' because it will be alright," added Repina.

What's worse, she says her 58-year-old father most likely won't be able to leave the country with them. All Ukrainian men between the ages of 18 and 60 are required to take up arms and help in the fight against Russia.

"I can't imagine him alone there," she said. "Mobilized to war is kind of, like, unbelievable. But I understand."

And while Zhytelna isn't afraid to talk about the war, Repina has to be careful what she says, fearful of retaliation against her family. Her parents and two brothers live in Russia, where Russian President Vladimir Putin has threatened to arrest those who criticize the invasion.
"The only thing I can do is show support for my friends and any families that are basically suffering right now, so I'm here for her as of right now," Repina said while hugging Zhytelna.

With the tennis season in full swing, the two are now trying to get back to the sport after a couple weeks off to deal with the stress of the invasion. They admit, the war that has driven a deadly wedge between Russia and Ukraine, is actually having the opposite effect on the two of them.

"Now that we're dealing with our countries, our families being in the middle of everything, it just brings us closer together," Repina said.