KABC
By Rachel Brown and ABC7.com staff
CALABASAS, Calif. (KABC) -- An investigation is underway in Calabasas where several disturbing and offensive signs were posted on the balcony of a condo.

Hate-filled messages were plastered across a door, which is visible from the street.

The signs were reported to Los Angeles County Sheriff's Department Tuesday and remained on the door Wednesday.

The posters include Nazi symbols, anti-Semitic speech and racial slurs against blacks and other minorities.

A man, the long-time owner of the condo, was seen Wednesday yelling and cursing at people from his balcony.

No threats have been made, according to the sheriff's department, but some neighbors say they feel unsafe and intimidated by the messages.

Calabasas Mayor Alicia Weintraub said her office is working with the city attorney and law enforcement to try to get the material removed.

Weintraub issued the following statement, in part:
"This type of material and language has no place in our community and we will do everything we can to get it down. Thank you to the residents who contacted the sheriff. I know we all feel sick that someone can so freely put up such hateful language in our community."

Condo board members say the resident has been fined but continues to re-post the signs.

"We will not stand for this type of material being displayed for everybody to see," Weintraub said at a press conference Wednesday.

Officials believe mental illness may have played a factor in the incident.

"We're dealing, obviously, with somebody not in a sound mind," Weintraub said. "So everybody is doing what they can to ensure that the situation ends in a safe manner."

Neighbors say the man has been posting the hate-filled signs for at least a year.

"I am not going to let these people stop us from praying, from being who we are," Polk said.

One neighbor said this isn't the first incident involving the condo resident.

"I have seen him around, he comes out screaming, yelling. I don't pay much attention to it," resident Rick Ricco said. 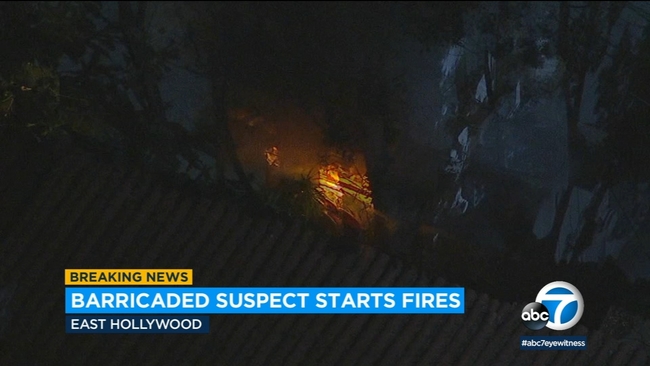