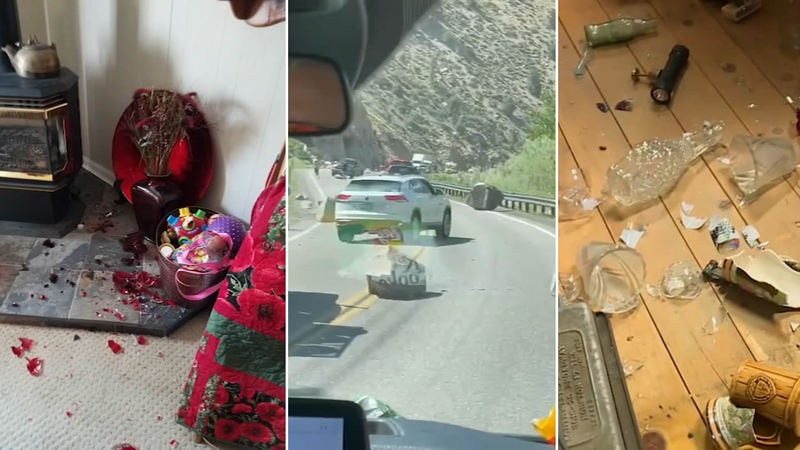 SAN FRANCISCO -- The ground is still shaking south of Lake Tahoe with more than 340 aftershocks since the magnitude 6.0 earthquake hit just before 4 p.m. Thursday.

The quake jolted both sides of the California-Nevada state line, tossed boulders onto a major roadway and was felt as far off as Las Vegas and even San Francisco, with days of aftershocks predicted, authorities said.

The quake was centered south of Lake Tahoe near Walker, a rural community of a few hundred households in the eastern Sierra Nevada. No major damage or injuries were reported, authorities said.

It was followed by dozens of aftershocks, including at least a half-dozen of magnitude 4 or above, according to the U.S. Geological Survey.

Video taken from KOA campgrounds in Coleville, Calif. shows cascades of dust from rocks crashing down the side of a mountain as an earthquake rocked the region.

"It was 3:30 in the afternoon, a time when people are probably sitting around, awake, attentive," said Dr. Austin Elliot from USGS. "A lot of people just at work basically."

But even behind the wheel, near the California-Nevada border, was a spectacle.

Video shared with ABC7 shows boulders scattered in the road on Highway 395 near Coleville, a major route through the northern Sierra Nevada. The road was closed because of the rock slides, the state Department of Transportation said. The closure stretched about 40 miles from near the tiny community of Willow Springs in Mono County north to the Nevada border.

A large amount of dust could be seen launching into the air from the rock slide.

"The tires went a little funny, I thought the road was just funny. Kind of wiggled," one driver said.

Video shows boulders scattered in the road on Highway 395 near Coleville, a town in Mono County, following an earthquake Thursday night.

The USGS reported dozens of aftershocks Thursday, the largest a magnitude 4.5.

"We have produced an aftershock forecast for this event," said Elliot. "It shows that there's a 6% chance of more and more aftershocks, larger than the initial earthquake."

But Elliot emphasizes that is an unlikely scenario.

He said the quake caused the "biggest jolts I've felt in Lake Tahoe in sometime."

Cooper described how he saw a "roller" wave from north to south on the lake as the quake hit.

We spoke to Sally Rosen, who owns a popular burger restaurant in Walker, near the epicenter, said her 2-year-old was napping in her arms in her home behind the restaurant when the earthquake hit.

"We felt the shaking of the building, and we didn't know quite what it was at first," said Rosen. "It kept going, and it was pretty intense and scary, frankly. So we ran out of the house as fast as we could and ran to the restaurant because the first thought was, 'Oh my goodness, we need to shut off the gas.'"

Cups and other items flew off the shelves, and oil splattered from the fryers, she said.

Communities all around Lake Tahoe and as far south as Fresno, California, felt the earthquake, which had a depth of 6 miles (9.8 km).

Video shared with ABC7 News shows the inside of an Arnold, Calif. home wildly shaking during an earthquake that struck about 80 miles away.

"People in the area should expect aftershocks for days following an earthquake of this size," said Jason Ballman with the Southern California Earthquake Center at the University of Southern California. "We've already seen a pretty vigorous aftershock sequence."
Ballman cautioned that reports of damage or injury might not be available for days because a lot of the shaking was felt in remote areas.

"While there are no preliminary reports of damage or injuries, this is a rapidly evolving situation & more details will emerge in the coming hours." California's Office of Emergency Services tweeted. "We are working closely with local officials to ensure they have the resources and support to rapidly respond to these earthquakes."


The Associated Press has contributed to this story.