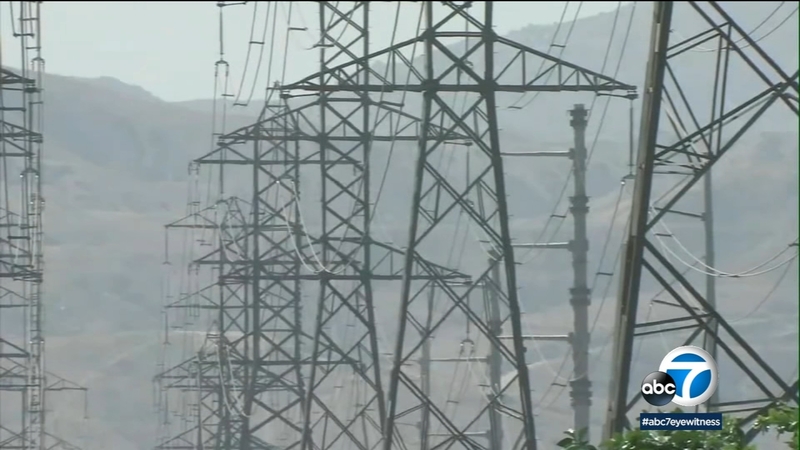 In an attempt to ease dependence on the strained grid, Gov. Gavin Newsom has allowed for the use of backup generators and auxiliary ship engines.

"It seems normal for most of the Los Angeles area. But, there is a heat wave going on statewide. So you have to think about the bigger picture, what's impacting the state," said Eric Boldt, a meteorologist with the National Weather Service's Los Angeles office. "We do see extreme temperatures. In fact, just yesterday, we broke record temperatures in Lancaster, Palmdale."

"What is happening more and more is that the geographic scope of high heat and also the geographic scope of fire risks is increasing pretty significantly. And so in Southern California, because of the interconnectedness of the power system, we're actually fairly vulnerable to both disasters and high temperatures that are occurring somewhere else," said Eric Fournier with UCLA's Institute of Environment and Sustainability.

Those transmission lines in Oregon account for about 8% of Monday's peak demand in California that now has to come from another source. Another stresser on the power grid is California's drought because hydroelectricity has become less reliable as reservoirs may not have enough water to produce the energy needed to maintain the grid. Scientists say the cause is climate change and de-centralizing the power grid may be the answer.

"The reason why we've become so spread out was that it was traditionally a very effective way of managing risk, because the risk that we were facing, let's say a heat wave or a place where it might burn, those were pretty small geographically relative to the scope of all this interconnected area that we can move power around on," Fournier said.

"But, now what we're seeing is the scope of those heat waves is exceeding the size of that western portion of the grid. So, you can no longer assume that for somebody else, it's not very hot over there, we can just buy power from them."