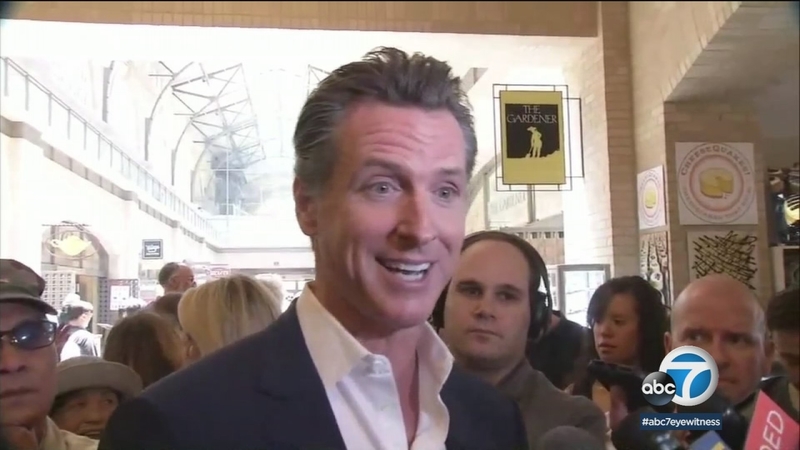 SAN FRANCISCO (KABC) -- A day after his primary win in the race for California governor, Democrat Gavin Newsom was continuing to talk about his top priorities.

One of the topics of discussion on Wednesday was the cost of living in the Golden State.

"It's the No. 1 issue I hear more than any other issue," Newsom said.

"We have to address that head on."

The cost of living is also a top priority for Republican candidate John Cox.

But there are differences in how the two candidates plan reduce the cost of living.

Cox addressed Newsom in a speech on Wednesday, calling out the Democrats for making a "colossal mess."

The Republican candidate expressed his desire to clean that "mess" up by repealing a $52 billion gas tax, but Newsom cautioned against that strategy.

"There's not $52 billion sitting around in the state's general discretionary fund to offset the cost associated with repealing that gas tax," Newsom said.

Many pundits believe Cox doesn't have much of a chance in November because there are so many more Democrats in the state of California than Republicans.

But just having Cox's name on the ballot may give many Republicans that much more of a reason to show up and vote, which could have an effect on so many crucial races for Congress.
Report a correction or typo
Related topics:
politicscaliforniagavin newsomjohn coxgovernorpolitics
Copyright © 2022 KABC Television, LLC. All rights reserved.
TOP STORIES
Gunman shot wounded man in head while victim was on phone with 911
Man who sparked probe into Kobe Bryant crash photos speaks out
Free N95 masks arriving at pharmacies as early as Thursday
LAPD to cover funeral expenses for off-duty officer killed, chief says
Kaiser to be sued after mom of 3 denied COVID shot dies, lawyer says
Inmate walks way from reentry program in LA, prompting search
More than 5,000 marijuana plants seized in Santa Ana pot bust
Show More
37 dogs impounded after man was facing eviction over number of pets
Toddler credited with saving family of 7 from devastating house fire
Riverside congressman introduces 4-day work week legislation
Oscar Mayer hot dogs and Velveeta cheese will get more expensive
Biden confirms he will nominate first Black woman to SCOTUS
More TOP STORIES News