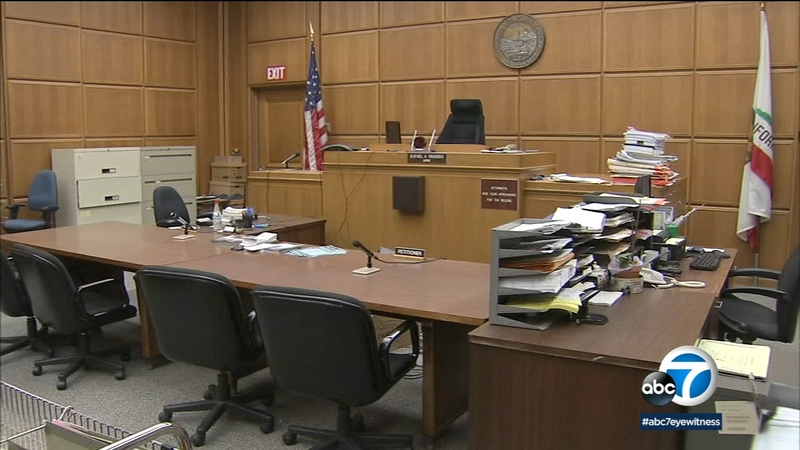 LOS ANGELES (CNS) -- California's Judicial Council has begun moving toward setting bail at zero for most misdemeanor and lower-level felonies in an attempt to limit the spread of the coronavirus in jails statewide by reducing the number of inmates.

During a meeting by teleconference on Monday, the council approved 11 temporary emergency rules designed to ensure public safety in the courts and jails while preserving civil rights. The rules, which take effect immediately, also allow local courts to set up remote hearings via teleconference technology and for counsel to appear on behalf of defendants in pretrial proceedings -- as part of a bid to limit the number of people in courtrooms.

As Chief Justice Tani G. Cantil-Sakauye opened the session, she said the group was working swiftly, but deliberately.

"(We are) trying our best to preserve rights and ultimately preserve lives,'' Cantil-Sakauye said. "We are at this point truly with no guidance in either history, law or precedent."

The council's first vote was to suspend foreclosures and evictions statewide, as a way to reinforce Gov. Gavin Newsom's executive order to delay such actions against California renters and homeowners.

All the rules came at the request of Cantil-Sakauye, the council chair, and by recommendation of the chairs of six internal committees.

"The Judicial Council should take these temporary actions in order to protect the health and safety of the public, court employees, attorneys, litigants, and judicial officers, as well as staff and inmates in detention facilities, and law enforcement during the state of emergency related to the COVID-19 pandemic,'' Cantil-Sakauye stated in her request.

More than 100 comments on the proposals were received from judges, public defenders, prosecutors, law enforcement, unions and members of the news media.

"In Los Angeles County, we implemented a zero-bail measure last week that allows us to further reduce the number of people in county jails and courthouses. I appreciate the collaboration among criminal justice leaders in Los Angeles County that has resulted in the rapid deployment of new and innovative approaches as we work to try to stop the spread of COVID-19 in our community,'' Lacey said.

Former San Francisco District Attorney George Gascon, who will face Lacey in a runoff in November, said the virus has accomplished what criminal justice advocates and research studies could not.

"The novel coronavirus has forced our system of justice to confront a not-so-novel question, one that largely defined the criminal justice reform movement even prior to the pandemic: Does keeping huge numbers of people in-custody on small-time offenses pose a greater threat to us all than letting them out?,'' Gascon asked. "This virus does not care if you're a prosecutor, victim or a defendant. Innocent or guilty, this virus can still kill you.''

The president of the Los Angeles County Public Defender Union, Nikhil Ramnaney, called the change to bail schedules statewide an important step. But he also noted that it applies only to new cases.

"It still leaves thousands of people in local custody throughout the state who were arrested and had bail set prior to the amendment,'' Ramnaney said. "We need to make sure that these people -- charged with identical offenses and who do not pose any risk to public safety -- are expedited for release. We believe that cash bail is clearly discriminatory against indigent persons and these discriminatory effects have been especially demonstrated during the emergency.''

Orange County District Attorney Todd Spitzer said the council should have allowed pretrial services professionals to do a risk assessment on some zero-bail cases, because some of the defendants may have prior strikes.

"They didn't do any risk assessment here,'' Spitzer said. They should use detention release staff to look at the dangerousness (of some defendants). I think that's very shortsighted.''

This was the second emergency meeting of the Judicial Council in response to the coronavirus outbreak.

Even before the earlier meeting, Cantil-Sakauye took action on March 23 to suspend all jury trials in California's superior courts for 60 days to allow courts to immediately adopt new rules to address the impact of the COVID-19 pandemic.

Two days later, Los Angeles-based unions representing prosecutors, public defenders and city attorneys called for a complete closure of local courts, claiming the mandate was not being followed and blasting the superior court's failure to accommodate appearances by phone and video conference.

How contagious is the coronavirus?
EMBED More News Videos

UCLA Health experts answer a viewer's question about how contagious is the coronavirus.