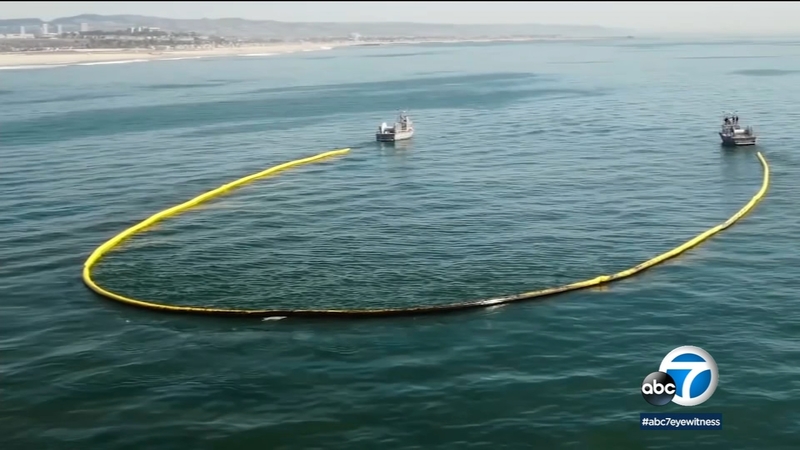 HUNTINGTON BEACH, Calif. (CNS) -- The CEO of the company that owns the oil rig and underwater pipeline at the center of a massive leak off the coast of Huntington Beach insisted Wednesday the company was unaware of any release of oil into the ocean until about 8 a.m. Saturday, and he said the firm responded and reported the incident immediately.

The U.S. Department of Transportation's Pipeline and Hazardous Materials Safety Administration's Office of Pipeline Safety issued a corrective action order Tuesday, saying the company received a pressure-drop alarm at 2:30 a.m., but the pipeline carrying crude oil was not shut down until about 6 a.m. Saturday.

Asked repeatedly about that timeline during a Wednesday media briefing in Huntington Beach, Amplify Energy CEO Martyn Willsher said only that the company was cooperating fully with federal and local investigators.

"We are working with them, giving them all the transparency and information that we have," he said.

As for whether there was an alarm that alerted crews to a pressure drop, Willsher said, "We are conducting a full investigation of that ... to see if there was anything that should have been noticed."

But he questioned whether there were any signs of alarm.

"I'm not sure if there was a significant loss of pressure," Willsher said, adding that when his company's crews saw oil in the water at 8:09 a.m. an emergency response was initiated.

"We did not take any additional time," he said. "People were notified very, very quickly."

Willsher said his company was also unaware of any reports of a sighting of oil in the water as early as 6 p.m. Friday.

"If we were aware of something Friday night I promise you we would have immediately stopped all operations and moved forward," he said.

Meanwhile, cleanup and containment efforts were continuing along the Orange County coast. So far, about 5,000 gallons of oil has been scooped out of the water, in addition to the tar balls and patties on the beach, said Capt. Rebecca Ore of the Coast Guard.

What could complicate things in the clean-up process after the oil spill in Orange County? ABC7's Christiane Cordero took a tour alongside the Coast Guard and explains in the video above.

Divers contracted to investigate the source of the leak confirmed that a large section of the 17.7-mile pipeline was moved out of place by as much as 105 feet, and a 13-inch "split" in the line was detected in the displaced section 4 1/2 miles off shore.

According to the unified command responding to the leak - including the Coast Guard, state Department of Fish & Wildlife and Amplify Energy - a 4,000-foot section of the pipeline was "displaced," or bent laterally by a maximum of 105 feet. Ore said Tuesday the split is the "likely source" of the leak that could have spilled as much as 144,000 gallons into the ocean, forcing the closure of Orange County beaches and some harbors.

Officials, however, are now speculating the amount of oil leaked into the ocean may be much lower, but the experts were still working on calculating the exact amount, Ore said.

Ore said no more oil was seen coming out of the 13-inch break in the line. Willsher said Tuesday the split in the line occurred at the point where the pipeline was most severely displaced, by 105 feet. He said the pipeline is a 16-inch steel pipe covered in concrete, indicating it would take a great deal of force to move and rupture it.

Willsher said the "pipeline has been pulled like a bow string," and it "is in almost a semi-circle."

Willsher confirmed Monday that the possibility of a ship's anchor causing the break was among the options being examined as a potential cause. That possibility gained credence in the federal corrective action order issued to the company's subsidiary Beta Offshore on Tuesday.

"The root cause of the accident remains unconfirmed at this time," according to the federal document. "Preliminary reports indicate that the failure may have been caused by an anchor that hooked the pipeline, causing a partial tear."

The Los Angeles Times reported Wednesday that Coat Guard investigators boarded the Rotterdam Express container ship in Oakland that had been in the waters off Huntington Beach at roughly the time the oil leak is believed to have started.

A spokesman for Hapag-Lloyd, the German company that owns the ship, told the paper the ship had been anchored in the vicinity of the spill but was "pretty far away from the pipeline."

According to the federal corrective action order issued this week, workers in Amplify Energy subsidiary Beta Offshore's control room received a low-pressure alarm on the San Pedro Bay Pipeline, indicating a possible failure at about 2:30 a.m. Saturday. The pipeline, however, was not shut down until 6:01 a.m. Saturday.

Willsher had said previously the company was unaware of a leak until it notified state regulators at about 9 a.m. Saturday, although he said the company believes the leak occurred at roughly 2:30 a.m.

The federal report states that the damaged pipe is about 98 feet below the ocean surface. The pipeline was installed in 1980.

Orange County's emergency management director Michelle Anderson told supervisors on Tuesday that spill estimates range between 120,000 to 150,000 gallons of oil. The plume has drifted as far south as Dana Point, shutting down harbors from Newport to Dana Point.

Ore said oil will continue flowing south with the current.

An estimated 15.67 miles of light oiling has been reported along Orange County shorelines, according to the unified command.

Beaches throughout Orange County remained mostly closed as efforts continued to scoop up tar and oil stemming from the massive spill.

Newport Beach offered some access with visitors welcome to go on the sand, but not in the water. Vessels within Newport Harbor can continue operating in the harbor but boats are not allowed in or out to keep them from spreading oil, city spokesman John Pope said.

The damage in Newport Beach is mainly concentrated on the west side from the Santa Ana river down to 52nd Street, Pope said. Some tar and oil has been seen further down the peninsula, but it's not as slick, and there has been some tar showing up in Corona Del Mar, he added.

Seal Beach's beaches remain open because officials say the oil slick has not affected their shores.

Officials have established a phone line for claims from residents or businesses affected by the spill. Anyone with a claim was asked to call 866-985-8366 and use "Pipeline P00547" as a reference.

Residents were asked to not try to rescue any oiled animals, but to instead report injured wildlife by calling 877-823-6926, or 877-UCD-OWCN.

Interested volunteers must take a four-hour course to train for clean-up efforts and wear special personal protective equipment. Anyone interested can get more details at calspillwatch.wildlife.ca.gov/volunteer or by calling 800-228-4544.

While the spill was not reported until 9 a.m. Saturday, some people reported smelling oil in the water late Friday. Members of the unified command confirmed that the National Response Center received a report of an unknown sheen on the water Friday night, but such reports are common and often turn out to be unfounded. State teams responded to the area to investigate the report before sunrise on Saturday, but were unable to properly investigate due to foggy conditions. The Coast Guard and Orange County sheriff's officials deployed after daybreak.

"It took about two hours on Saturday morning to detect oil in the water," Ore said.

The state Department of Fish and Wildlife has ordered the closure of Southern California fisheries in response to the spill, prohibiting the taking of fish and shellfish from Huntington Beach to Dana Point.

The spill occurred in federal waters at the Elly oil-rig platform, built in 1980 to process crude oil from two other platforms, which draw from a large reservoir called Beta Field. Elly is one of three platforms operated by Beta Operating Co., which also operates Ellen and Eureka nearby. Elly processes oil production from Ellen and Eureka and is fed by some 70 oil wells. The processing platform separates oil from water.

Elly is one of 23 oil and gas platforms installed in federal waters off the Southern California coast, according to the Interior Department's Bureau of Ocean Energy Management. Besides Elly, a processing facility, there are 20 others that produce oil and gas, and two are being decommissioned.

The offshore platform system has been linked to earlier leaks, including a 2,000-gallon spill that led to a $48,000 federal fine against the operator for improper calibration of a leak-detection system. The corroded pipeline carried oil, water and gas from Eureka to Elly, the Los Angeles Times reported about the 1999 incident.

The spill was reminiscent of another ecological disaster decades ago. An estimated 3,400 birds were killed when the American Trader oil tanker ran over its anchor and punctured its hull on Feb. 7, 1990, spilling an estimated 416,600 gallons of crude oil off the coast of Huntington Beach.

As a result of the spill, the Wetlands and Wildlife Care Center was established March 31, 1998, at 21900 Pacific Coast Highway to help injured and orphaned wildlife including oil-soiled birds. A makeshift facility at that site treated birds injured in the 1990 spill, according to the center's website.