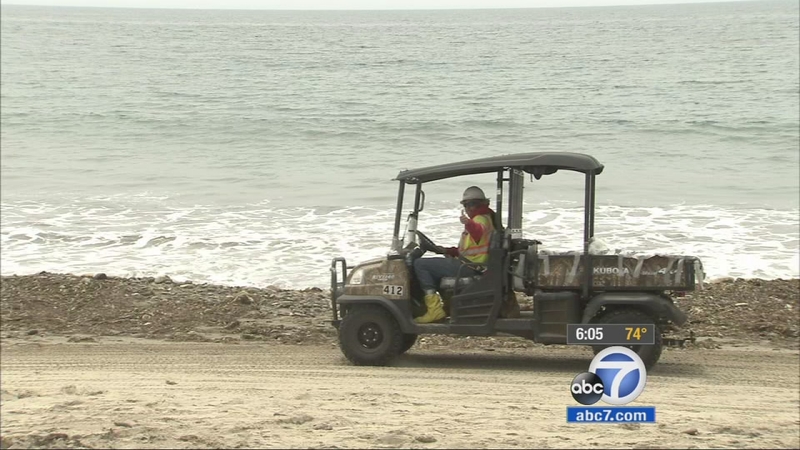 GOLETA, Calif. (KABC) -- On a summer day in Santa Barbara County, crowded beaches are usually the norm. But at Refugio State Beach, the sand is barren, the waters stripped of any swimmers. The parking lots and camping sites, however, are packed with environmental cleanup crews and equipment.

A sign posted at the state park guardhouse points the finger at the May 19 oil spill caused by a ruptured pipeline owned by Plains All American Pipeline.

The spill resulted in the closure of both Refugio and El Capitan state beaches, but its reach is now expected to stretch even further down the Southern California coast.

"It's been washed up as far away as Los Angeles, and so this is a spill that affects the whole state of California and one we should all be angry about," Assemblymember Das Williams (D-Santa Barbara) said.

But there's good news for beachgoers just to the south of Refugio: El Capitan State Beach reopened to the public Friday just in time for the weekend.

"It was kind of a bummer knowing that there's an oil spill here, but it's nice to celebrate the grand opening of El Cap," Solvang resident Heather Hanson said.

More than 100,000 gallons of oil are estimated to have spilled, and officials believe seven percent of it still remains to be cleaned up. Many people, however, say they're not too concerned about contamination.

Meantime, efforts to prevent future scenes like this are still underway. In Santa Barbara Friday afternoon, a joint oversight hearing was held which zeroed in on the causes of the oil spill and the cleanup response.

"We really do need to go forward and find out how we make sure this does not happen again," State Senator Hannah-Beth Jackson (D-Santa Barbara) said.

For beach fans, El Capitan State Beach's reopening was a welcome sight. And even though skies were gray and turnout was sparse, some say they're one step closer to putting the oil spill in the past.