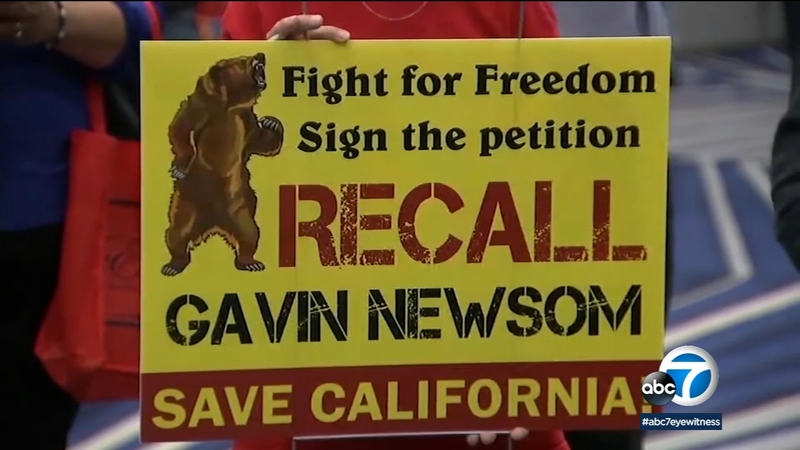 LOS ANGELES (KABC) -- There's no denying California voters are confused about the recall ballot's two questions and how to proceed.

Even more confusing, Gov. Gavin Newsom is advising his supporters to only vote on the first question - on the recall itself - and leave the question on candidates blank.

"It's rather amazing to me because we're in this national conversation about expanding the right to vote for every single person in this country, but then we have the California Democrats saying don't even vote for half the ballot at all," said Christian Arana, vice president of policy at the Latino Community Foundation.

"So I'm rather concerned about that messaging. Why would we leave it to chance that someone else could replace this governor?"

Arana worries confusion and a number of other factors have led to voter apathy for the Sept. 14 recall election, especially among Latinos who represent roughly 8 million eligible voters in California, about 6 million registered.

"There isn't necessarily a rush to go out to vote when in fact there are so many problems our community is facing right now, whether it's rental relief or jobs or healthcare," he said. "And we're still in the thick of this pandemic so unfortunately this recall election may not fall to the top of the to-do list for many Latino families across the state."

"You find people that just don't know there's an election going on. There are people who thought they had just voted because we just experienced the 2020 presidential election."

The Berkeley IGS poll released a month ago showed among voters likely to participate, 47% would recall Newsom compared to 50% planning to vote no. White residents account for 53% of all registered California voters, but the poll found whites could account for two-thirds of the recall vote.

According to the poll, black and Latino voters are much more inclined to oppose the recall.

But Assemblymember Reggie Jones-Sawyer, who represents parts of South Los Angeles, says his majority Democratic constituents don't know what's at stake - which is one of the reasons Newsom's campaign is concerned about turnout.

"We have not done a really good job of letting them know how important and how dangerous it is for this Republican recall and that all the advances we put in place in California is in jeopardy," Jones-Sawyer said. "Your livelihood and everything. Once we create that sense of urgency, I'm absolutely positive we can get people out."

The recall is less than three weeks away and 2.8 million ballots have already been returned according to Political Data, Inc. So, there's not much time left for voter outreach.