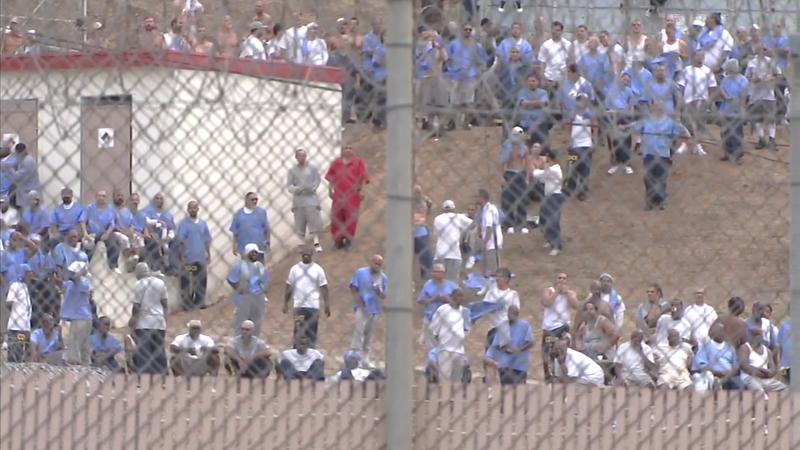 NORCO, Calif. (KABC) -- More than half a dozen people protested outside the California Rehabilitation Center in Norco, two days after a riot that they claim was caused by a new state policy that went into effect there earlier this week.

"His life is in danger," said Desiree Rubio, of Ontario. She's talking about her husband, who's incarcerated at the Norco facility. "He has about two and a half years to go, and we've come this far to have this happen!?"

Rubio is referring to a new policy by the California Department of Corrections and Rehabilitation, in which the general prison population is being reintegrated with those with sensitive needs. In other words, the general prison population will be sharing facilities with those prisoners serving time for child molestation, or those who've cooperated with law enforcement.

"You're putting both of them at risk," Rubio said. "It's like putting a cat in a dog's cage. So you're putting his life at risk."

The CDCR said the policy went into effect in Norco earlier this week. That's when the riot broke out.

"There was a riot reported on Tuesday at CRC at approximately 3:00 p.m., which was quickly quelled by staff," said CDCR press secretary Vicky Waters. "No staff or inmates were injured."

But protestors like Rubio aren't so sure. She also wonders whether any of the guards were injured during the riot.

The CDCR said the policy started going into effect across the state earlier this year.

"The ultimate goal of doing these integrated yards is to prepare inmates for their eventual return to society," Waters said. "The sensitive-needs yards have become unsustainable, and just as violent as general population yards.

"Overall, the system is working to a large degree across the state. But we have had some acts of violence during integration, none that have resulted in any serious injuries to either staff or inmates."

But they said they still haven't been able to get to the bottom of what happened because all of those involved in the riot are on lockdown and not allowed to speak with family members for the time being.
Report a correction or typo
Related topics:
norcoriverside countyinmatesriotprotestprison
Copyright © 2021 KABC-TV. All Rights Reserved.
TOP STORIES
Assistant director of Baldwin film had been fired from 2019 job
Pastor shot and killed in Compton
3 people found dead inside home on Balboa Island in Newport Beach
FDA panel meets to discuss vaccines for kids
Residents in recent burn areas asked to stay alert as storm approaches
No charges filed yet after Texas kids left with skeletal remains
Teammate of LeBron's son takes floor against Lakers
Show More
Breastfeeding can help protect mothers' brains, UCLA study finds
Latest SoCal storm won't erase drought, experts say
'DWTS' Horror Night see two couples earn perfect scores
Bear cubs playfully wrestle in snow in Lake Tahoe
Deputies respond to San Jacinto Walmart after reports of armed person
More TOP STORIES News