Some young cancer patients have a new reason to smile, thanks to a survivor who was bothered by the "ugly" non-slip socks issued to patients.
KABC
By Jessica De Nova 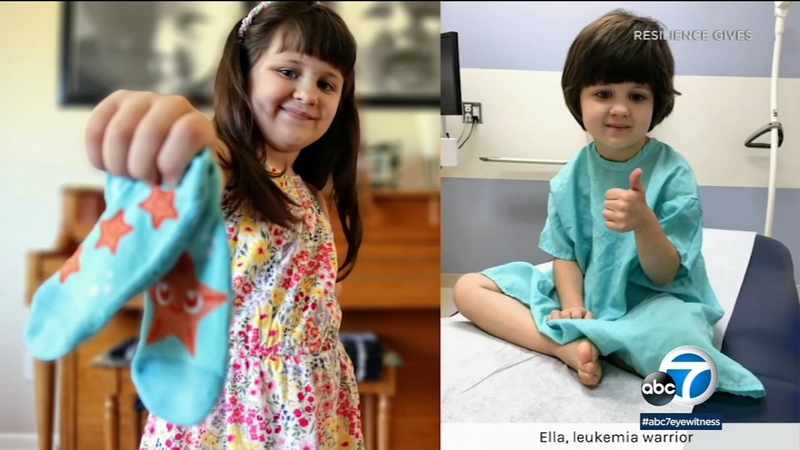 ORANGE COUNTY (KABC) -- Those who have been hospitalized before know that comes with usually wearing a plain gown paired up with some non-slip socks.

A local man took the initiative to brighten up the lives of young cancer patients by creating adorable prints designed by other children battling cancer.

Founder of Resilience Gives Jake Teitelbaum, who is a survivor himself, remembers going through stem cell transplant.

"When you go in, you're admitted, you get your gown and a really tacky pair of usually beige, ugly non-slip socks, and for whatever reason those always stood out to me," he says.

The idea was born when he worked with a friend, Zamari, who he met in chemotherapy.

Teitelbaum says, "We started having a lot of people sending in photos of themselves wearing Zamari's socks out and about. And for this 14-year-old who was battling non-Hodgkin's lymphoma, it was this little bright spot of, 'Wow, there are all these people out in the world thinking of me as I'm going through this journey.'"

Nine designs later, each with a story to tell, Resilience Gives donates one pair for each purchased.

Actress Fran Drescher, most commonly known for her role in the hit TV series The Nanny, joined in on the fun as she is a cancer survivor herself.

Through the Paying it Forward Initiative, the foundation's goal is to donate 10,000 pairs by the end of the year to children in hospitals across the country.

"I can't wait to give them to CHOC, Children's Hospital of Orange County, tomorrow," says 5-year-old Harlow Langtree.

Having battled ovarian cancer at the early age of just 16 months, and now in remission, she knows why one small pair of fun socks make such a big difference.