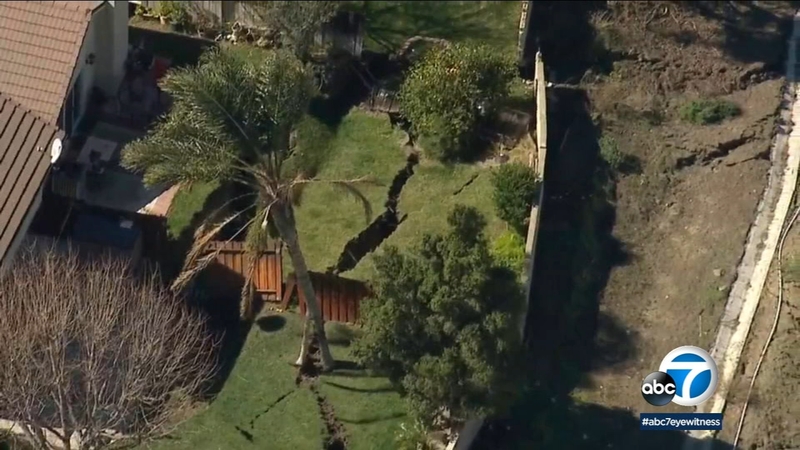 CANYON COUNTRY, Calif. (KABC) -- The hillside backyards of several homes in Canyon Country visibly shifted in the aftermath of recent storms that drenched the Southland, prompting concern among residents.

At least two residential properties were affected in the 19700 block of Terri Drive, where a large fissure was visible in the ground behind the houses.

One residents' home, which was yellow-tagged, had to evacuate the property. They will be in a hotel for at least 30 days, while their residence is evaluated.

"Just like that. I know it'll get taken care of and I know it's going to be a long time," Stephanie Estrada said.

During her interview, the ground behind her home shifted again, takin down part of a wooden fence. Geologists and fire department officials were at her home to survey the damage. They appeared as puzzled as she did for why it suddenly collapsed.

Estrada bought her home in September.

"It's frustrating. I've gotten emotional a couple of times. I think more so for the kids because we bought this house for the backyard. It's unfortunate," she said, as her voice cracked with emotion. "You could stand out here, you can just hear it crack, crack, crack. If you go down the hill you can hear the ground moving."

Amy Ambrose said she and her team placed sandbags at the bottom of a retaining wall near the damaged backyards. She said experts are developing a plan on how to fix the cracking and that they're trying to protect the homes.

Fences on properties at the bottom of the hillside were mangled by the sliding earth, raising the specter of a larger possible landslide.

Authorities are not saying for sure that the intense storms that hit the Southland over the last few weeks could have contributed to the fissure.