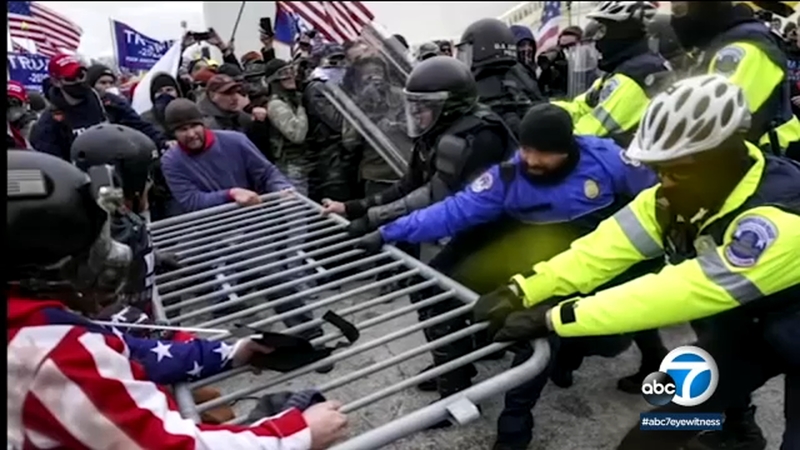 LOS ANGELES (KABC) -- An off-duty Los Angeles County sheriff's deputy was at the U.S. Capitol on the day a violent mob breached the building in an effort to halt the certification of the Nov. 3 presidential election, Sheriff Alex Villanueva said on Thursday.

Asked during a Facebook Live event how many of his deputies were at the Capitol on Jan. 6, Villanueva said one individual from his department had identified him or herself as being at the scene, "and that information has been passed on to the FBI.''

In a subsequently released statement, the sheriff said, "I am very concerned one of my deputies may have been involved in wrongdoing at the U.S. Capitol,'' adding that an administrative investigation has been opened into the matter and he has briefed the FBI.

Villanueva did not provide details on whether the deputy took part in the insurrection or is accused of committing any specific crime, and asked that anyone with additional information contact the sheriff's department.

One officer with the Los Angeles Police Department reported attending the pro-Trump rally in Washington, D.C., that preceded the violence, but did not participate in any activity at the Capitol. The officer said he returned to where he was staying and saw the Capitol being stormed on television.

Things are moving ahead in Washington, D.C. with Inauguration Day preparations and a massive security operation that will include protective measures taking place in California.
Gov. Newsom is deploying 1,000 members of the California National Guard ahead of Inauguration Day protests.

Less than a week from President-elect Joe Biden's Inauguration, Washington, D.C. resembled a war zone with 7,000 National Guardsmen in the city and 21,000 expected by Wednesday.

Non-scalable fencing surrounded the Capitol and razor wire was added on Thursday.

"We know that it's the right choice and the best way to keep everyone safe," said mayor Muriel Bowser.

The FBI warned that right-wing radicals view last week's riot at the Capitol as a success and now different groups are coordinating ahead of the inauguration. Violence is also possible in all 50 states.

"The real issue we need to focus on as an American people is that there is a violent and extreme ideology that has taken hold, and we saw the results of what happens when that is able to fester," said Rep. Abigail Spanberger.

The FBI says they've identified over 200 suspects in the attack on the capitol, and made 100 arrests, including Hunter Ehmke of Glendora, who is set to appear in federal court on Thursday.

Following the most bipartisan impeachment in history, it's now the senate's turn, although they don't return to Washington, D.C. until Jan. 19, so inauguration day is the earliest the senate could begin their trial.

President Trump has no organized legal team ready to defend him. Sources tell ABC News the president has grown increasingly irritated with his personal attorney Rudy Guiliani and hasn't been taking his calls.

California Gov. Gavin Newsom is mobilizing 1,000 members of the National Guard over concerns of civil unrest ahead of President Donald Trump leaving office.