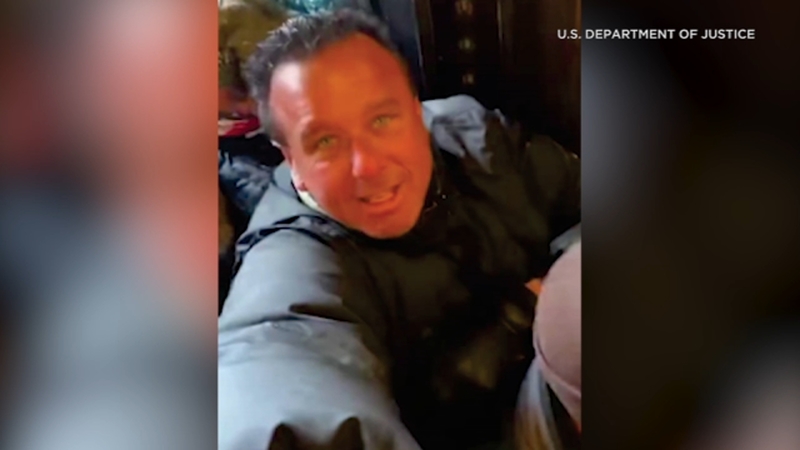 HUNTINGTON BEACH, Calif. (KABC) -- Federal agents on Thursday morning swarmed the Huntington Beach home of a man who was then arrested for his alleged role in the riot at the U.S. Capitol earlier this month.

Mark Simon is accused of participating in the attack on the Capitol building in Washington D.C. on Jan. 6th. He faces two federal charges, according to an unsealed complaint filed in U.S. District Court for the Central District of California: entering restricted buildings or grounds and unlawful activities on Capitol grounds.

Federal agents said they were able to use a blog post to track down Simon's involvement.

An FBI agent was tipped to Simon through a post at orangejuiceblog.com, which included video and images of the riot at the Capitol as Congress was certifying the election of President Joe Biden, according to an FBI affidavit dated Jan. 21 detailing the allegations against Simon.

The agent said the video showed Simon using his phone to record a group of rioters pushing their way into the Capitol while a law enforcement official was trying to keep the mob out. At one point in the video, the agent alleged that Simon turned the camera back on himself and exclaimed: "In the Capitol baby, yeah!" and "2021 Donald Trump!"

The video was initially posted on the Facebook page of someone who was with Simon at the Capitol with the comment "Peacefully Storming the Capital" and with a hashtag of "StopTheSteal," according to the agent, who said the post had been deleted, but surfaced on orangejuiceblog.com.

The agent sent the blog post to Huntington Beach police detectives, who recognized Simon and his friend, who was characterized as a "known activist" in the city, according to the affidavit.

Simon was expected to appear in court in Santa Ana on Thursday afternoon.

The owner of a Victorville gym is among more than 100 people nationwide facing charges for participating in the insurrection at the U.S. Capitol on Jan. 6.

He was taken into custody the day after the owner of a Victorville gym was arrested, also accused of participating in the insurrection.

FBI agents arrested Jacob Lewis, 37, of Victorville on Wednesday. He is facing charges of knowingly entering a restricted building without lawful authority and violent entry/disorderly conduct on Capitol grounds.