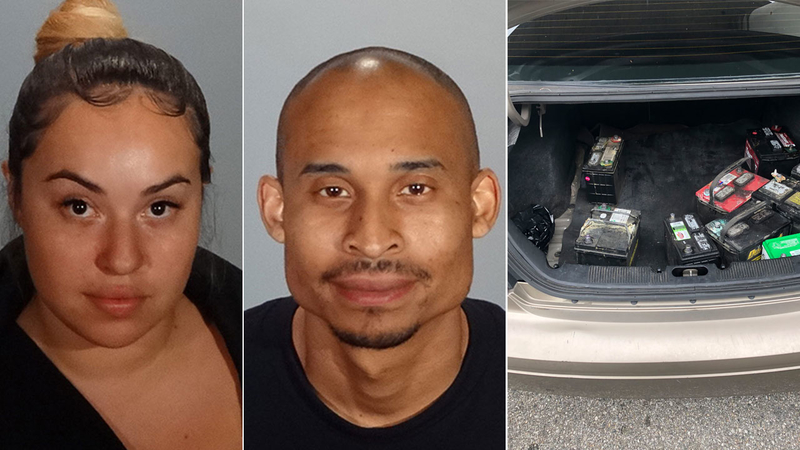 GLENDALE, Calif. (KABC) -- Authorities are urging people to be wary of thieves who are stealing car batteries all across Southern California.

In Tustin alone, police said there's been at least 20 cases that have been random, and most have happened overnight when people are sleeping.

"It's almost a crime of opportunity," Lt. Robert Wright said. "The biggest thing we can always tell people is to be aware of your surroundings...if you see something unusual - call the police."

Glendale police arrested two suspects connected to a string of car battery thefts that happened around Southern California, but it's unclear if those thieves are connected to the Tustin thefts.

Between July 28 and Aug. 21, authorities received multiple reports of stolen car batteries for vehicles that were parked on streets or in parking structures.

The suspects mainly targeted vehicles with hoods that could be opened from outside or underneath. Detectives were able to obtain footage of a man and woman connected to the thefts who were driving a red four-door Kia with no plates.

As the investigation continued, the duo connected to the thefts were also caught on surveillance cameras throughout Los Angeles and Orange counties. During the thefts, the man would open a vehicle's hood and remove the battery, while the woman stood nearby as a lookout.

The suspects also used several different vehicles when they committed the crimes.

Around 8:50 a.m. on Aug. 21, Glendale officers contacted the two suspects, who were identified as 30-year-old Elvie Porter, of Hawthorne, and 22-year-old Kimberly Hernandez, of Los Angeles. The pair were loitering around vehicles in the Park and Ride at Wilson Avenue and Harvey Drive, authorities said.

An officer saw Porter carrying a tool in his hand and the pair came in a beige 2004 Ford Taurus. Officers also noticed gloves and pliers on the floorboard of the vehicle, as well as medical marijuana containers in the center console.

A driver's license records search showed Porter and Hernandez had suspended licenses and that Porter had a misdemeanor warrant. Investigators were then able to search the vehicle and found 10 stolen car batteries in the trunk.

The duo were also connected to three thefts that happened hours before their arrest in Glendale, authorities said.

Porter and Hernandez were arrested and booked on suspicion of possession of stolen property. Porter had been arrested recently for battery thefts and was on probation for those crimes. Hernandez was also on probation.