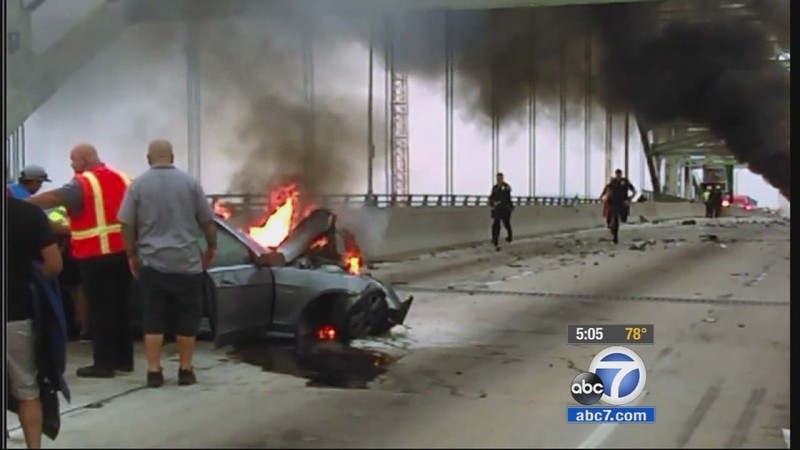 Around 7:11 a.m., authorities responded to a traffic collision on the bridge. A preliminary investigation indicated a 2012 Mercedes Benz, driven by 28-year-old Alvin Shaw, of Hawthorne, was traveling the wrong way, heading westbound in an eastbound lane.

The car collided with a 2014 Ford Fusion and a 2010 Nissan pickup truck. Long Beach Fire Department officials determined the driver of the Nissan truck was killed at the scene. Two men were transported to a nearby hospital in critical condition.

pic.twitter.com/uKZAUOXhNz. This is a tragic incident, but shows the dedication to our citizens by our Police Officers and Firefighters.

A police officer sustained minor injuries to his arm while he was trying to help remove a driver from one of the cars engulfed in flames.

Authorities believe Shaw had been spotted by officers earlier in the morning driving erratically and crashing through barricades near Special Olympics events. Officers tried to stop the vehicle, but lost sight of it.

The bridge was closed for several hours in both directions during the investigation. By 3 p.m, it had reopened.