Carl Nassib's jersey is top-seller after he comes out as gay; NFL to match pledge to Trevor Project 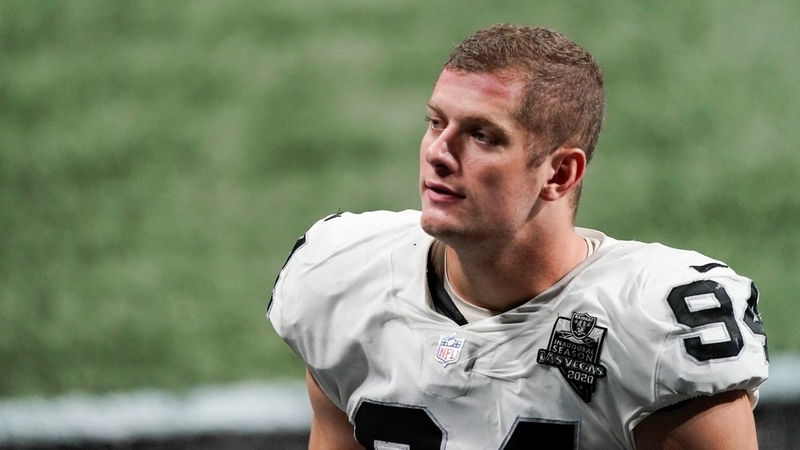 LAS VEGAS (KABC) -- On the day after Raiders defensive end Carl Nassib became the first active NFL player to come out as gay, his football jersey was a top-seller -- the latest indicator of the overwhelmingly positive reaction to his announcement.

Meanwhile, on Tuesday the NFL said it would match Nassib's $100,000 pledge to the Trevor Project, a suicide prevention and crisis intervention organization for youth in the LGBTQ community, ABC News reported.

The 28-year-old Nassib made the announcement in a social media video on Monday. Later that day and the next, his was the top-selling jersey across the Fanatics network, a sports retailer, according to ESPN.

"What's up people?" Nassib posted. "I'm at my house here in West Chester, Pennsylvania. I just want to take a quick moment to say that I'm gay. I've been meaning to do this for a while now, but I finally feel comfortable enough to get it off my chest. I really have the best life, I've got the best family, friends and job a guy could ask for."

The Trevor Project provides crisis intervention and suicide prevention services to the LGBTQ+ community. It commended Nassib's announcement, saying in a statement that his donation will help it "scale our life-saving crisis services to reach the more than 1.8 million LGBTQ youth who seriously consider suicide each year in the U.S."

"They're an incredible organization, they're the No. 1 suicide-prevention service for LGBTQ youth in America," Nassib said. "And they're truly doing incredible things. And I'm very excited to be a part of it, help in any way that I can and I'm really pumped to see what the future holds."

"Sesame Street" released a new episode featuring a family with two gay dads who have a daughter in celebration of Pride Month.

Shortly after the announcement, the Raiders organization released a statement, which read in part: "Nassib's announcement will go down as a historical one in the NFL and the world of sports, along with being a step forward in a path toward equality."

Sarah Kate Ellis, president and CEO of GLAAD, a leading LGBTQ advocacy organization, called Nassib's "powerful coming out is a historic reflection of the growing state of LGBTQ visibility and inclusion in the world of professional sports, which has been driven by a long list of brave LGBTQ athletes who came before him."

Nassib joined the Raiders in 2020 as a free agent on a three-year, $25 million deal, with $16.75 million guaranteed. He had 2.5 sacks and an interception in 14 games, with five starts, for Las Vegas last season.

A third-round pick of the Cleveland Browns in 2016, Nassib also played two seasons with the Tampa Bay Buccaneers before joining the Raiders. He came to national attention as a star of the Browns' "Hard Knocks" appearance in 2018, giving financial advice to teammates and offering his take on the existence of aliens.

Former Missouri linebacker Michael Sam became the first openly gay player to be drafted in NFL history in 2014, when the Rams took him 249th overall. He was cut by the team at the end of training camp that year and never played a regular-season game in the NFL.