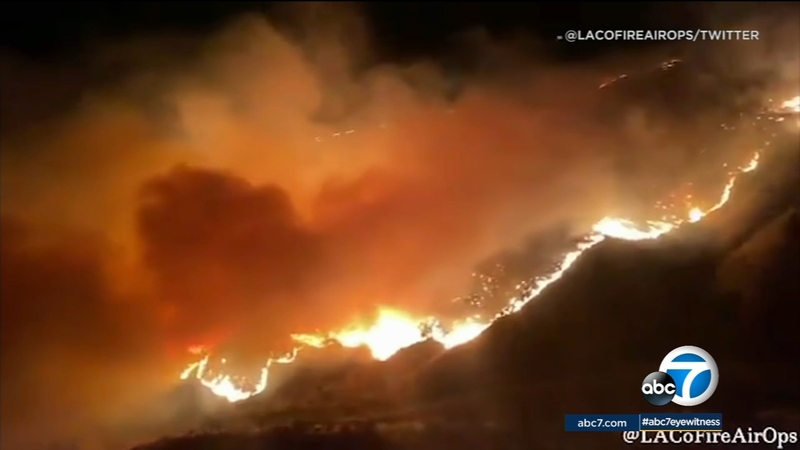 The blaze, dubbed the Equestrian Fire, was reported at 3:44 a.m. in the 26900 block of Tapia Canyon Road, according to the Los Angeles County Fire Department.

Winds up to 40 mph overnight quickly fanned flames, spreading the fire from 5 acres to 20 acres while burning in medium brush on the east side of Interstate 5.

"We knew that the winds were coming, we obviously knew that we had a hot week, a hot week before that. So the humidity would be down, the moisture would be down," said Sky Cornell with LAFD. "So what we did is we put a strike team, pre-deployed. We had a lot of people working, we had over 200 firefighters here on scene, we had three aircraft up in the air. So we were able to put a very aggressive attack on this fire and keep it to 75 acres."

Crews are battling a fire in Castaic that was threatening structures early Monday morning.

No homes were threatened, but the raging flames burned near several structures, including the Pitchess Detention Center and an equestrian center. There were no horses at the equestrian center at the time.

Evacuations have not been issued.

The blaze was among four brush fires in Southern California on Monday. Fire crews were working to corral blazes in Eagle Rock, Lake Balboa and El Sereno.

By 7:30 a.m., the wind prompted power outages for over 10,000 customers across the Southland. Los Angeles Department of Water and Power reported outages in Venice, Studio City, Vermont Square, South Central and East Hollywood.