Coronavirus: Black market cure for cats with feline infectious peritonitis is illegal, but is saving thousands of lives

"I didn't even know about FIP and 24 hours later, I've got these meds in my hands," said one cat owner.
KABC
By Phillip Palmer and Lisa Bartley 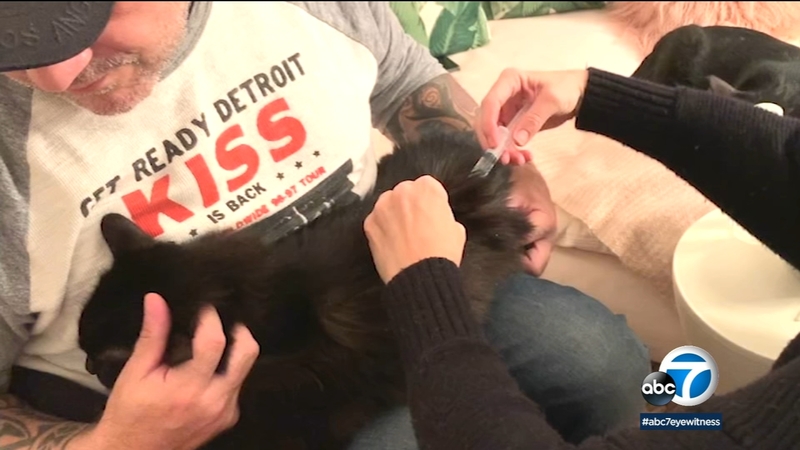 Black market cure for cats is saving thousands of lives

Cats are facing a pandemic of their own: a coronavirus strain that's estimated to kill tens of thousands of cats worldwide every year.

Feline infectious coronavirus, also known as FIP, is not a new virus and it is a different strain than the virus that causes COVID-19 in humans. Until now, it's been a death sentence for cats who develop the most severe forms of the infection.

Most cats develop the feline coronavirus at some point in their lives, but show little to no symptoms. In some cats, however, the virus mutates -- causing the deadly FIP.

"I didn't even know about FIP and 24 hours later, I've got these meds in my hands," Amy Shafer tells Eyewitness News.

Her 13-year old cat, Mr. Charlie Bear, was at death's door in late March of this year, in the grip of FIP.

"Vomiting, lethargy, decreased appetite and fever," Amy says. "He stopped playing with toys, eating not so much."

Amy's veterinarian told her there was no hope, that she "may want to bring him back in a day or two to have him put down."

Desperate to save the cat she says helped her through a difficult divorce, Amy and her boyfriend Christophe Liglet were tipped off to the Facebook group "FIP Warriors."

"So, they're just like a secret group, you have to be told about it," says Amy.

Later that same night, Amy and Christophe drove to Torrance to meet a couple they met through FIP Warriors who had a few vials to spare of a black-market drug for FIP-infected cats. Amy handed over $441 in cash for the illicit, possibly life-saving drug.

"It felt like a drug deal," recalls Christophe with a laugh. "I was like, I'm going to call the cops in five minutes if she's not out."

Amy says the results were almost immediate. His fever broke, he started gaining weight back and is now playing with toys and climbing his cat tree. Charlie Bear is about halfway through the 84-day treatment protocol which Amy estimates will cost between eight and ten-thousand dollars.

"I'm sure my family thinks I'm insane, but they would do the same," says Amy. "Charlie Bear is the best, he's just like a little person."

50 YEARS OF RESEARCH LEADS TO POTENTIAL CURE
Dr. Niels Pedersen, a professor emeritus at UC Davis, devoted his 50-year career to studying FIP and searching for a cure.

"One percent of all cats die of FIP," Dr. Pedersen tells Eyewitness News. "This is a pandemic for cats."

Pedersen and his team at UC Davis found a cure in a drug known as GS-441524, or GS for short. It blocks the virus's ability to replicate.

"We did a field trial with 31 cats and were able to cure 25 of them," says Pedersen.

"It's miraculous," says Dr. Brian Murphy, who has since taken over the UC Davis feline coronavirus program. "I mean miraculous for me and super cool because we found this drug, a needle in a haystack."

The problem? GS-441524 is almost identical to remdesivir, the much talked about drug for COVID-19 in humans, manufactured by California-based Gilead. Early on, Gilead hoped remdesivir would prove to be successful in treating humans in Ebola.

Gilead invented and owns the patents for both GS-441524 and GS-5734 (remdesivir), and its scientists co-authored the UC Davis studies that demonstrate the drug's effectiveness in treating FIP. So far, however, Gilead has refused to license GS-441524 for use in cats.

Gilead did not respond to repeated requests for comment on this story, but told the Veterinary Information Network last year that the company is holding off on licensing GS-441524 to other parties for commercial development until remdesivir has FDA approval.

"It's very frustrating because we were faced with having this huge discovery, a great discovery," says Pedersen. "We had a drug that could safely and effectively cure most cats with FIP. This was a dream of 50 years."

UC Davis is now moving forward with testing a similar drug, GC376, in cats with FIP. That drug has been licensed by another company, California-based Anivive. Anivive is pursuing FDA approval to use the drug in cats and hopes to begin clinical trials at UC Davis later this year.

Murphy at UC Davis says his team gets emails weekly from cat owners desperate to get their cats into a clinical trial.

"We're sympathetic, empathetic toward their plight," says Murphy. "By the time we get around to doing our trial, that cat is going to be dead."

With no legal means of getting the drug, thousands of cat owners have turned to the black market. The drugs are knock-offs of GS-441524 and manufactured by various companies in China.

"The need is so intense and so great that people are going to find a way around it and that's what's happened," says Pedersen. "I warned Gilead about this."

CAT OWNERS AND VETERINARIANS PUT IN DIFFICULT SPOT
On the FIP Warriors Facebook page, cat owners share before and after photos, guidance and support on how to get and use the drug. The group has swelled to more than 24-thousand members since its inception.

The FDA tells Eyewitness News that any unapproved drug is considered illegal, but cat owners are unlikely to be targeted by the FDA.

"In general, the FDA typically focuses its enforcement activities on the manufacturer and/or seller of the unapproved product, as opposed to the end user," says an FDA spokesperson.

"Anytime you use unapproved drugs, it's buyer beware," says Pedersen, who notes that no cure is 100% guaranteed and some cats do relapse after treatment.

Saving the lives of beloved pets with an illegal drug puts veterinarians who want to help in a legal and ethical bind.

"I do not purchase the product, I can't prescribe it," says an anonymous L.A. area veterinarian who agreed to speak anonymously with Eyewitness News. "It's a black market."

The veterinarian estimates she's treated 18 cats with the drug so far, and all but two survived.

"They're bright, happy with no signs of disease," she says. "They're happy at home with their owners or their rescue. And that was the amazing part to me because I had never seen that before. Prior to that, FIP was always a death sentence."

She realizes that administering the drug could potentially put her veterinary license in jeopardy.

Koi is a one-year old rescue cat who came down with FIP in mid-April. Her owner, a musician who goes by the stage name "Tillie," calls Koi her "little punk girl."

"It's scary because it's a lot of money," says Tillie. "You don't really have any guarantee."

Tillie says she couldn't bear the thought of losing Koi, after losing another beloved cat to cancer last fall.

"Within two days, I would say, we could tell it was working," Tillie says of the black-market drug. "She's a completely different cat, she runs around, she wants to get into everything."

Tillie knows it's a risk to flout the law, but says that potentially saving Koi's life is worth it.

"It would be really cruel to go after people just trying to save their animals," Tille says. "It's kind of the position that we've been put in, and it's either letting your animal die or do whatever you can to fight for them and that's what I'm going to do."