Not only is Lauretta Jones inspiring others much younger than she, she's already making plans to return to college in pursuit of another degree.
KABC
By Tony Cabrera 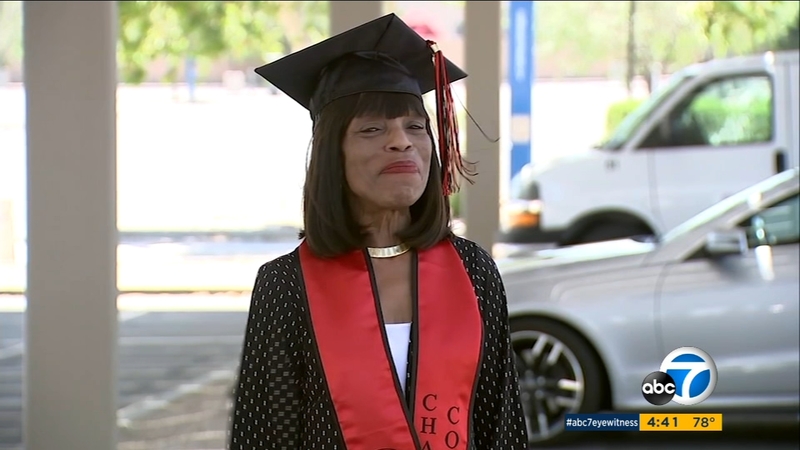 Fontana resident graduating from college at 69

FONTANA, Calif. (KABC) -- A 69-year-old Fontana resident, one of the oldest students to graduate from Chaffey College, is living proof that you're never too old to learn or get a college degree.

"When I first came in I thought, ok I'm old - they're not gonna pay any attention to me, but no, it wasn't like that," said Lauretta Jones.

Jones earned an associate's degree in Anthropology surrounded by people who appreciated her life experiences.

"I gained so much respect from the younger ones. And during the times that I grew up and whatever subject we were on, they were so interested to hear what happened say like in the 60s and the 70s, even my professors, they would let me say what I can remember during that time," she said.

Before she began pursuing a higher education, Jones was a correctional officer and also served in the National Guard. After stepping away from her career to take care of her parents, she decided to return to school. She was first in the x-ray technician program, but a lifelong passion for people was re-ignited in an anthropology class.

"That triggered it back to the days when I really wanted to study anthropology in which I was denied that back in the day when I was in junior high school because of the color of my skin," she said.

Decades later, she's become an inspiration, overcoming obstacles to get her cap and gown, including taking the bus to get to class because she doesn't have a car. But when it comes to your education, Lauretta says - no excuses.

"I recommend Chaffey for any student. Young, middle-aged, older seniors, come to Chaffey. You have no reason. No reason not to complete your goal," said Jones.