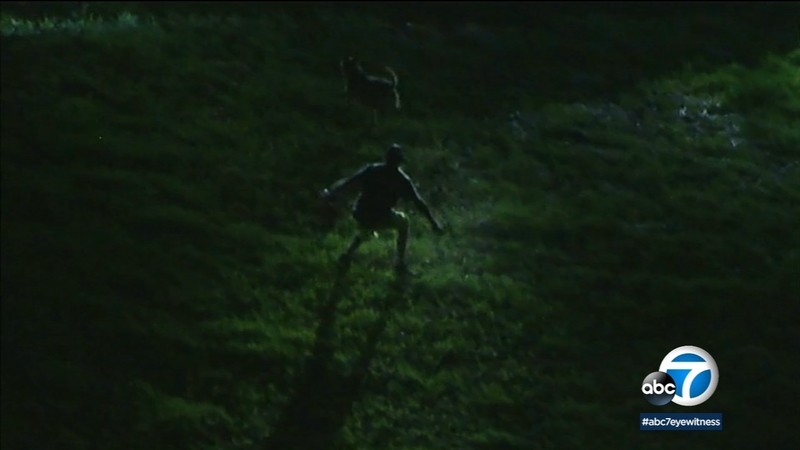 The assault with a deadly weapon suspect led police on a chase in the San Fernando Valley and crashed through a chain-link fence before coming to a stop, but he refused to come out of the car.

After negotiating with the suspect, police say they broke the car's window with a less-lethal round and used a concentrated formula of pepper spray that forced the suspect to jump out of the vehicle and run uphill.

An assault with a deadly weapon suspect is in a standoff with Los Angeles police after crashing through a fence during a chase in the San Fernando Valley Thursday evening.

Officers sent in a K-9 that latched onto the man, who then went rolling downhill before multiple officers used a Taser and took him into custody.

AIR7 HD was over the pursuit at about 5:30 p.m. and captured the moments the suspect drove on the wrong side of the road, evaded a PIT maneuver, approached a cul-de-sac and plowed through the fence before getting stuck on the hillside. He barricaded himself in the car, making a number of bizarre moves, including spray painting the windows. Police believe he was under the influence of narcotics.

Police say the man was wanted for violating a restraining order and is accused of showing up to a former girlfriend's home and threatening her with a knife.

After police responded to the scene and spotted the suspect's vehicle, the chase began. The standoff lasted for more than two hours. Police allege the suspect was armed with a knife when he was forced out of the car.

The suspect was taken to a Northridge hospital to be treated for injuries police described as minor. He faces felony charges for assault with a deadly weapon and violating a restraining order.

Police shot rubber pellets and used a K-9 to take a stalking suspect into custody after the end of a chase in Corona.