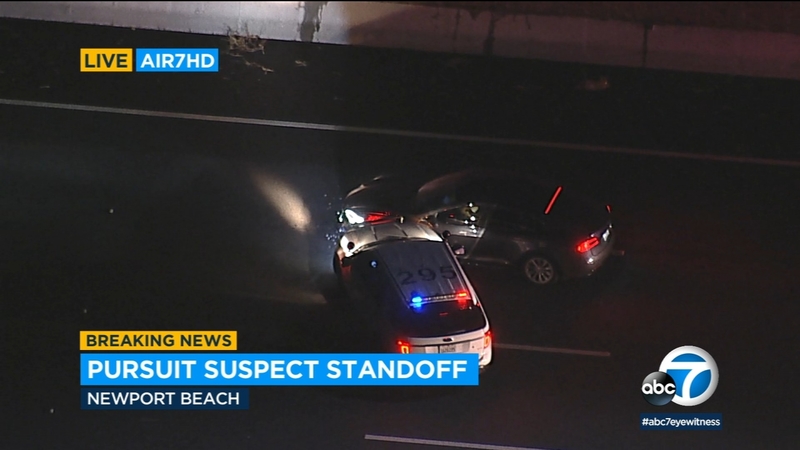 CHP slams into Tesla to stop suspect after chase, standoff in OC

NEWPORT BEACH, Calif. (CNS) -- A man suspected of stealing a Tesla was taken into custody in Newport Beach Tuesday night after a high-speed chase that began in Hawthorne.

The chase began when Hawthorne police attempted to stop the suspect on suspicion of driving a stolen car but the man drove away onto the 405 Freeway around 10 p.m., at times reaching 90 mph and 100 mph.

The man drove on both residential streets and the 405 Freeway, weaving in and out of lanes on the freeway as he reached Seal Beach in Orange County with California Highway Patrol officers in pursuit.

The Tesla appeared to lose power near the Bonita Canyon Drive off-ramp from the San Joaquin Hills (73) Transportation Corridor on the Newport Beach-Irvine border and CHP units began to close in.

After stopping the car, the suspect stepped out of the vehicle several times and tossed a number of items onto the freeway and onto the roof off the Tesla before reentering the car.

After an approximately 20-minute standoff with the CHP, officers fired less than lethal weapons ammunition at the suspect, who quickly ducked back into the Tesla and drove away slowly at around 15 mph.

Officers then employed a PIT maneuver by slamming a patrol car into the side of the Tesla, causing the suspect to finally stop. The man was then taken into custody at approximately 11:10 p.m.