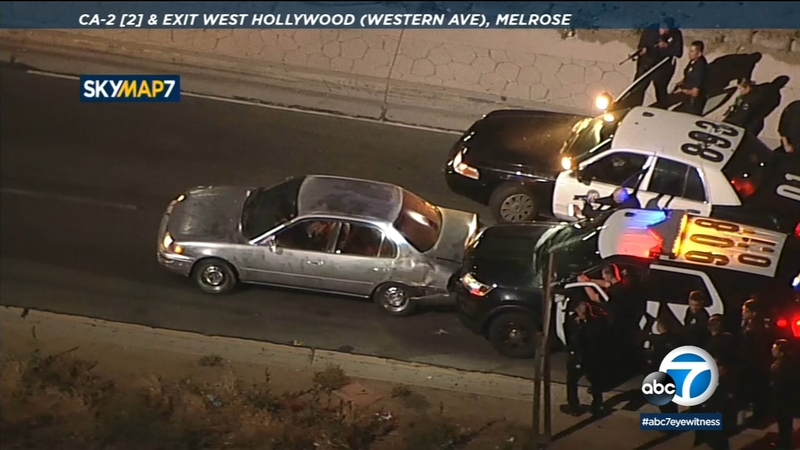 Driver reverses and slams into LAPD vehicle at end of chase

LOS ANGELES (KABC) -- A woman was arrested after she led Los Angeles police on a chase and then slammed into a patrol vehicle in reverse, prompting a standoff on an off-ramp of the 101 Freeway Monday night.

LAPD were chasing the possibly stolen car on surface streets and on freeways as the pursuit went through Alhambra, Boyle Heights, downtown L.A. and ended in Hollywood.

The suspect was on the Western Avenue off-ramp of the 101 and suddenly reversed and slammed into the front of an LAPD patrol vehicle. The driver was stopped in front of several cars prior to backing up into police.

After a standoff that lasted about 20 minutes, police approached the vehicle, slammed a window and that's when the driver surrendered without incident.

Vehicles on the northbound 101 came to a complete stop and traffic was snarled during the standoff.

It's unknown if the woman or any officers were injured in the incident.

The driver of a possibly stolen car was taken into custody in the Hollywood area after a brief standoff with LAPD officers Monday night.