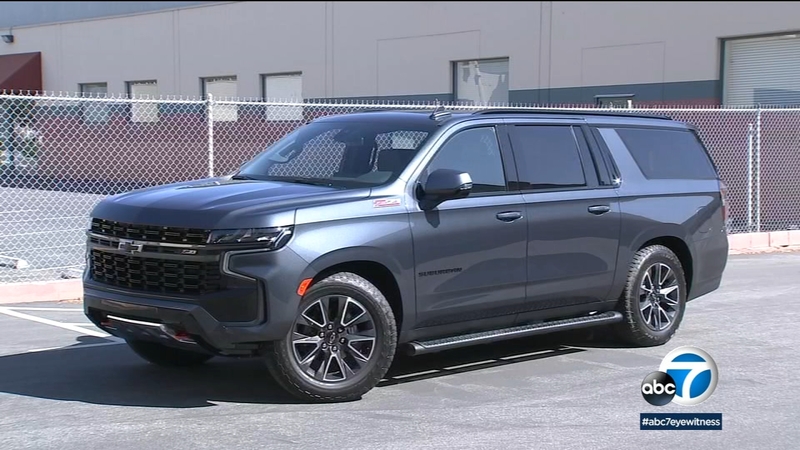 LOS ANGELES (KABC) -- The big Chevy SUV has been around forever. But the Suburban is getting a complete makeover for 2021, including new safety technology, a smoother ride and more interior space.

This full revamp will also be applied to its shorter sibling, the Tahoe. The Tahoe actually gains the most from the redesign, adding length and more importantly interior space. But of course if you need maximum interior space - even with all three rows of seats in place - the Suburban is still the king of carrying stuff, or people, or both.

While the styling is all new, the biggest actual change occurred underneath. For the first time, there's an independent rear suspension. That not only improves the ride quality, but is what helped increase interior space. And passengers can certainly be pampered, with things like huge flat screens for the second row. For the driver, there's all manner of standard and available safety tech. Its base price is $57,795.

The Suburban actually had a direct competitor years ago called the International Travelall, also a cross between a station wagon and a truck. But it was discontinued in 1975, and then Suburban had the whole segment to itself, for many years. But then, Ford wanted in on the action.

They brought out the Expedition in the late 1990s, and eventually added an extended-length version now called Max. The big Ford has a base price of $55,835, and got its own makeover a few years ago, and is once again available with this Cowboy-themed King Ranch trim. Where the Ford and Chevy differ is under the hood. The Expedition utilizes Ford's powerful EcoBoost turbocharged V6, whereas Suburban stays traditional, with a V8. And to be frank, some buyers want the V8 just for the sound.

This king-size Chevrolet SUV sells very well within its segment, but in the grand scheme of SUVs is more of a bit player than a superstar as far as volume goes. Chevy's got other sport utilities from extra-small to medium-large to rule the sales charts. But if you need size and carrying or towing capacity, the Suburban is definitely sticking around. And, it's wearing a fresh set of clothes for a new era.
Report a correction or typo
Related topics:
automotivechevroletauto newsu.s. & worldconsumer
Copyright © 2021 KABC-TV. All Rights Reserved.
TOP STORIES
Brush fire spreads to 320 acres in Gorman area
Corona shooting: Anthony Barajas, 19, dies after days on life support
Ceremony honors Riverside County's fallen officers
Bacon may nearly disappear in California as pig rules take effect
Villanueva: 'Grave concerns' over deadly shooting by deputies on video
The Abbey in WeHo requires proof of COVID vaccination or negative test
Bacteria at beaches near Dockweiler continues to exceed standards
Show More
Florida new national epicenter after record number of new COVID cases
5-month-old baby dies after being ejected from car in Torrance crash
Family decries controversial arrest of Texas teen
Judge recuses himself from rape case against OC couple
Venice homeless encampment: Crews continue cleanup as deadline arrives
More TOP STORIES News