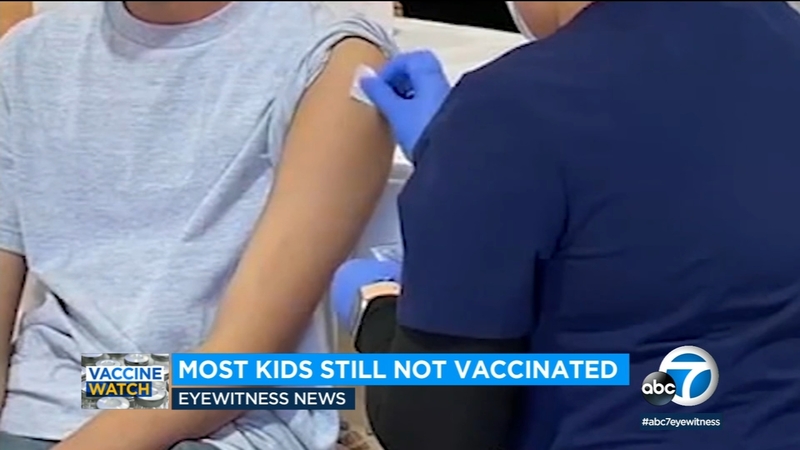 RIVERSIDE, Calif. (KABC) -- With the start of the holiday season, health officials are reminding the public about the importance of vaccinations and booster shots, especially in children.

In the Inland Empire, in particular, officials are worried that childhood vaccination rates are lagging the rest of the state.

It's been less than a month since the FDA gave emergency authorization for kids 5-11 to get the COVID-19 vaccine.

At this point, the vast majority of kids that age have not been vaccinated. But in some Southern California counties, the rates are even lower than the average.

Gov. Gavin Newsom noted that, pandemic aside, children already have had to get a series of vaccinations in order to attend public school.

"All of our kids that go into public school have to receive 10 vaccinations," Newsom said earlier this week. "It's never easy. The measles, mumps vaccine and whooping cough. They're hard. Including these vaccines."

Newsom says reported about 12% of kids 5-11 have received at least one shot statewide.

The number is slightly lower in Los Angeles County - but much lower in the Inland Empire.

In Riverside County, only 6% of kids in that age range have received a shot.

She said parents should be aware that children do go through side effects from the vaccine - but typically at lower rates than adults do.

"They also get quite a bit of fatigue, so they can have arm soreness which is similar to adults. But in general, the percentage of kids getting these side effects is less compared to the percentage in adults."

In the meantime, booster shots for anyone over age 18 have now been given emergency authorization, as the COVID-19 positivity rate in California continues to drop.

"Today we lay claim to having the lowest positivity rate in the United States of America: 1.9%," Newsom said. "We're seeing a decline,"