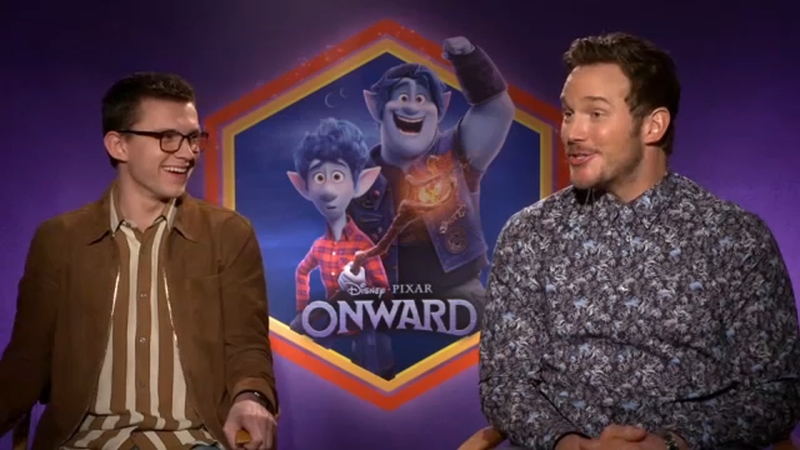 LOS ANGELES -- In "Onward," Tom Holland and Chris Pratt lend their voices to the characters of elven brothers Ian and Barley Lightfoot. The two attempt to resurrect their late father for just 24 hours using a magic wand Ian's been given on his 16th birthday.

Things don't go exactly as planned, and it sets the siblings out on an adventure where they discover a lot about themselves, and one another.

Pixar has brought us living toys, incredible superheroes and lovable monsters. But never before has the animation powerhouse brought us magic. That changes its latest feature, "Onward," starring Tom Holland and Chris Pratt as teenage brothers.

The two actors have been friends for several years. They first connected in the "Marvel Universe", as Spider-Man and Star-Lord. So the chance to be "brothers" on-screen was an easy task.

"When I met Tom about four or five years ago, he was kind of coming into the Marvel Cinematic Universe," said Pratt. "I felt myself in this position to finally be able to extend the same kind of like loving support and voice that I know meant so much to me, hearing it from my brother, and my sister when I was coming up. I would say it to him, things like 'Remember who you are' and 'At the end of the day, you're going to really kick yourself if you don't remain nice' and you know, 'Save your money' and 'Don't take any wooden nickels' and, you know, 'Remain smart and kind' and all that stuff."

The brotherly love extended in both directions.

MORE: Pixar's new film 'Onward' is based on its director's yearning for his own father
EMBED More News Videos

'Onward', Pixar's newest offering, tells the story of two brothers who long to enjoy one more day with their late father. For director Dan Scanlon, it was a very personal story.

"Chris is kinda like my big brother in lots of ways," said Holland. "You're kinda like Barley, happy go lucky, energetic, very optimistic, funny, exciting. And an idiot."