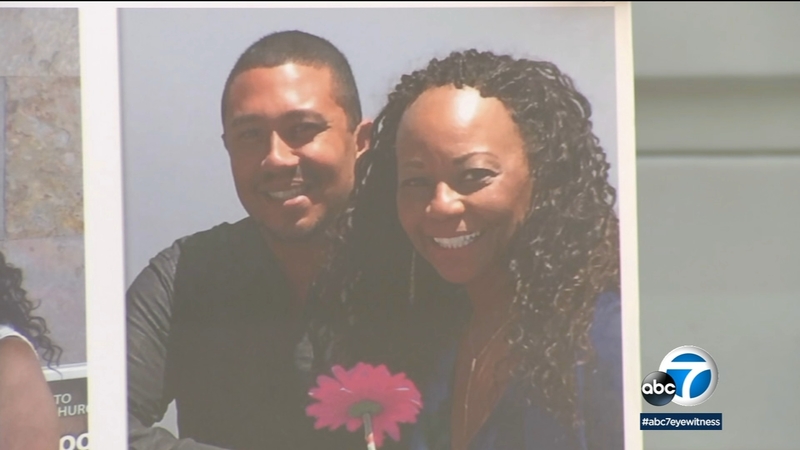 SANTA ANA, Calif. (KABC) -- A jury found that Anaheim police were largely responsible for the 2018 death of a man, a case that some have compared to the death of George Floyd.

The jury on Thursday found that officers were negligent and largely responsible for the death of 35-year-old Christopher Eisinger, awarding his parents nearly $1.8 million in damages.

The panel deliberated for about 5 1/2 days before reaching the verdict and determining that the officers were 78% responsible for Eisinger's death, and he was responsible for the rest. The trial lasted six weeks.

Eisinger was involved in a struggle with Anaheim police just after midnight on March 2, 2018, and died eight days later.

Outside the courthouse, Eisinger's mother said she was "very excited, happy. We won. We won justice for Chris... He shouldn't have died that night. I miss him so much."

Katrina Eisinger said the verdict "sends a message... that police lie." She said her son "would be so proud of me. I told him I would protect him and never give up."

She and her attorney, Annee Della Donna, called on Orange County District Attorney Todd Spitzer to reopen an investigation of the officers involved in the arrest. They were previously cleared of any criminal wrongdoing under Spitzer's predecessor.

Family attorneys say Anaheim officers held a knee to Christopher Eisinger's neck and back for up to five minutes and he couldn't breathe. He died in the hospital eight days later.

Before the trial, the attorneys for Eisinger's parents held a news conference and compared the case to the death of George Floyd at the hands of Minnesota police. Former Officer Derek Chauvin was convicted of murder in Floyd's death.

Lawyers say the five officers held a knee to Eisinger's neck and back for up to five minutes. They also say he said he was sick and couldn't breathe. When he goes unconscious, no one renders medical aid until medics arrive.

"When we took this case in 2018 there was no George Floyd," Dubin said. "When George Floyd happened I thought everything would change, but it didn't. (Anaheim's attorneys) kept to the same old dinosaur response. When (Eisinger died) we had nothing but the officers who were witnesses and they said they don't recall, don't remember."

Dubin said the city's police officials "controlled the narrative" and held a news conference alleging Eisinger had a metal pipe, which turned out to be erroneous. "They ran with that all the way through trial."

Mike Lyster, a spokesman for the city, said officials "respectfully disagree with the outcome."