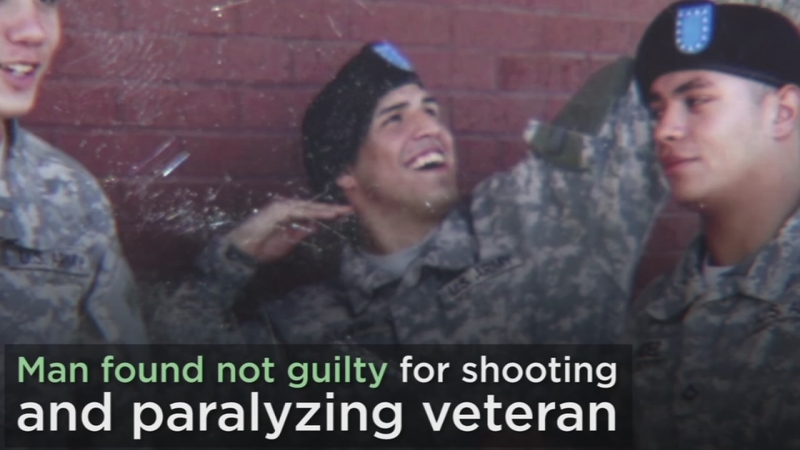 Man found not guilty in shooting that left veteran paralyzed

SAN BERNARDINO, Calif. (KABC) -- The family of an Army veteran who was left paralyzed after a shooting in San Bernardino had an emotional outburst in a courtroom as the suspect was found not guilty on Friday.

Christopher Sullivan's family said they had been betrayed by the very system their son fought and nearly died for.

Sullivan, who was an Army specialist on leave after surviving a bomb attack in Afghanistan, was shot during his homecoming party on Dec. 23, 2011.

Jurado sat next to his attorney during the verdict reading and the relief was clear on his face after he was found not guilty of attempted premeditated murder.

Jurado's attorney said his client, who had been in custody for the past five years, was remorseful about what took place. However, he said what happened was a case of self-defense.

"He was getting attacked by a whole bunch of people. He did his best to avoid any sort of conflict by firing a warning shot. That didn't appease them and he was attacked by Chris and a second shot went off. He was still attacked, which required a third shot," said Benjamin Arsenian, Jurado's attorney.

"But the entire time I felt like he was just trying to get away. There was never any intent to kill," he continued. "He made a stupid mistake by bringing a gun to a party. It was an idiotic thing to do and that was really what he was guilty of."

Sullivan, who was a standout football player at San Bernardino High School, was shot in the buttocks and neck.

The bullet shattered his spine, paralyzing him from the neck down.
EMBED More News Videos

Ruben Jurado was found not guilty in a shooting that left Army veteran Christopher Sullivan paralyzed from the neck down.

Following the emotional outburst, Sullivan's family was escorted out of the courtroom. His family did not want to go on camera to discuss the verdict, but a close family friend told Eyewitness News that justice had not been served.