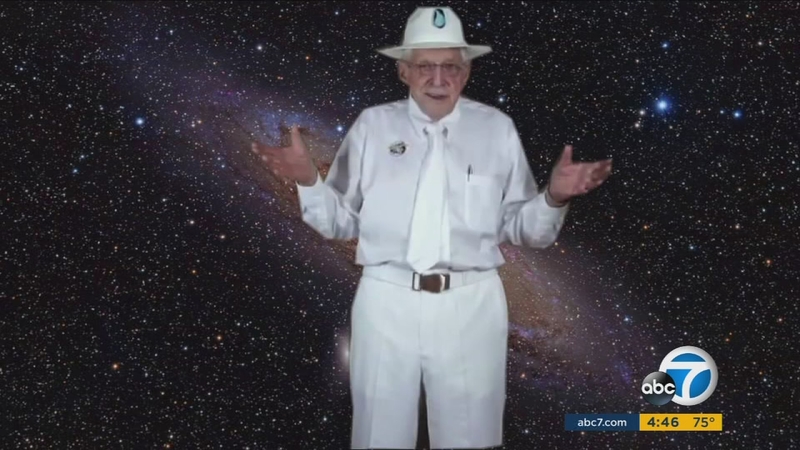 LOS ANGELES (KABC) -- Earlier in 2016, Eyewitness News got an inside look at the "Church of Bleach," where believers claim their "miracle potion" can cure anything from cancer to the common cold.

The Genesis II Church of Health and Healing believes that MMS, which is essentially industrial bleach, is a religious sacrament.

The church excommunicated an Eyewitness News producer after she went undercover armed with her iPhone at a seminar in Costa Mesa.

Their founder, Jim Humble, is a former Scientologist who claims he's a billion-year-old god from the Andromeda galaxy.

"And then I asked to be put in the part of the space navy that watched over Earth," Humble, the self-proclaimed Archbishop of the Genesis II Church of Health and Healing claims in a video.

Humble also claims he discovered the miracle potion in the jungles of South America.

"I just treated 800 cases of HIV just recently in Africa, every one of them came out good," Humble is heard stating in another video.

Eyewitness News met Archbishop Mark Grenon, who was peddling the potion at a Genesis II seminar in Costa Mesa back in January.

"Tell them Jesus heals you while you drink this," our cameras captured Grenon telling the seminar.

Believers said the "miracle mineral solution," or MMS, is their religious sacrament. They believe it's a cure for many illnesses and diseases, from cancer to HIV, autism, leukemia, the common cold and even hair loss.

"He wrote me, 'I coughed up a tumor,'" Grenon read to the seminar. "'The doctor was flabbergasted. The tumor is gone.'"

But MMS is made up of potentially toxic chemicals and a FDA warning calls MMS a "potent bleach."

Sodium chlorite, the main chemical used to cook the controversial concoction, is typically used in waste-water treatment and hydraulic fracking.

"It's not toxic, it's not dangerous at all," Grenon told those in attendance at the seminar.

"Are you telling people you can cure breast cancer with this?" Ross asked Grenon.

"We tell people we cure a lot of things, heal, cure, treat. I can cure all of those," Grenon responded.

"You can treat all of those diseases? Breast cancer?" Ross asked.

Back inside the seminar, our undercover Eyewitness News producer caught Grenon's angry reaction to his interaction with Ross.

"I hope they think I'm a raving lunatic. I really do," Grenon said. "He won't put up what I said... I'll be shocked if they put that on."

In a yearlong undercover investigation, Eyewitness News dug deep into the unorthodox underworld of the Genesis II Church of Health and Healing. (Part 2)

Ross was able to track down Humble outside Guadalajara, Mexico.

Humble admitted to Ross that he gets a financial cut from the MMS seminars and stands by the health claims.

"It cures all of those things, yes," Humble responded.

"You really believe that?" Ross asked.

"The body heals itself," Humble attempted to explain.

"Where did you study medicine?" Ross asked.

"I didn't study medicine. I'm not a doctor and I'm proud of it," Humble said.

In a newsletter published on Wednesday, Humble acknowledges the investigation by ABC News and clarified his stance on MMS. His newsletter read in part:

"There are certainly times I have said some things that I probably should have said differently. For lack of a better way to express things at the time-or because others put words in my mouth, in the past I have stated that MMS cures most of all diseases. Today, I say that MMS cures nothing! MMS serves as a tool to kill pathogens and oxidize poisons in the body which allows the body to heal the body. We live in a toxic world and we are fortunate to have MMS, as well as various other important health tools, to combat the ill effects of poor foods, and chemicals that make us sick."