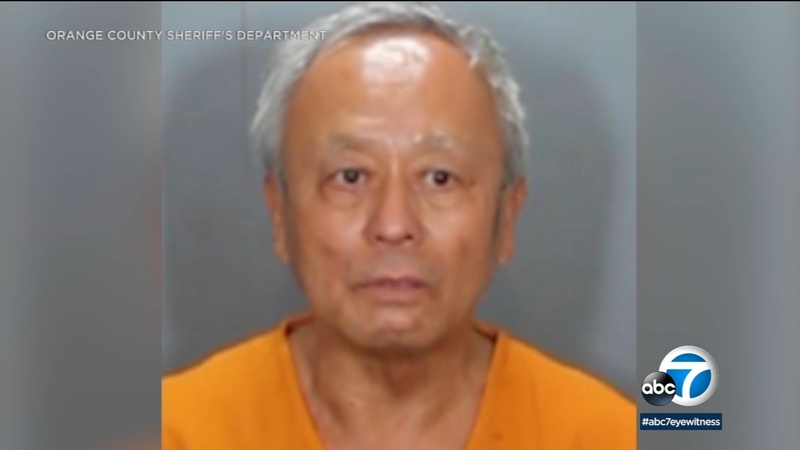 LAGUNA WOODS, Calif. (KABC) -- A Las Vegas man accused of killing a prominent doctor and injuring five others in a church shooting in Laguna Woods has been charged with 10 counts, including murder, and could face the death penalty.

David Chou's court appearance last about five minutes on Tuesday as he went before a judge remotely.

His arraignment date was expected to be announced on Tuesday but it was delayed until June 10. He's now being held on no bond.

Aside from the first-degree murder charge for the death of 52-year-old John Cheng, Chou also faces five counts of attempted murder and four counts of possessing destructive devices with the intent to kill or harm.

Prosecutors are also seeking an enhancement for "lying in wait."

Those charges could carry a maximum sentence of death or life without the possibility of parole, Spitzer said.

"We typically think of the person who hides in the bushes," Spitzer said. "This case is about the person concealing themselves in plain view."

Spitzer added Chou was deliberate when he decided to open fire on a Taiwanese congregation that had gathered inside the Geneva Presbyterian Church's banquet hall on Sunday, May 15.

He said every case is unique and as he and his office look at the facts, Spitzer can quickly decide if he will seek the death penalty or not.

"I will share with you this case is definitely a case that I'm looking at for death," Spitzer said.

Authorities have said Chou - a U.S. citizen whom authorities say grew up in Taiwan - was motivated by hatred of Taiwanese people.

A Las Vegas man accused of killing a prominent doctor and injuring five others in a church shooting in Laguna Woods has been charged with 10 counts and could face the death penalty.

"While there's very strong evidence right now that this was motivated by hate, we want to make sure we have put together all the evidence that confirms that theory in the case," Spitzer said, when asked whether he would be filing charge of a hate crime.

Cheng, a doctor who heroically charged the gunman, was killed and five other people were wounded.

Chou drove to Orange County on Saturday and the next day attended the lunch.

Though he knew no one there, he spent about an hour mingling with about 40 attendees and then executed his plot, authorities said at a news conference.

He chained the doors and put super glue in the keyholes, authorities said.

A shooting at a church in Orange County, which left one person dead and another five injured, was a "politically-motivated hate incident," authorities announced Monday.

Authorities said Chou opened fire and in the ensuing chaos, Cheng tackled him and tried to disarm him, allowing others to jump in and help.

The parishioners ended up tying Chou up with extension cords, authorities said. 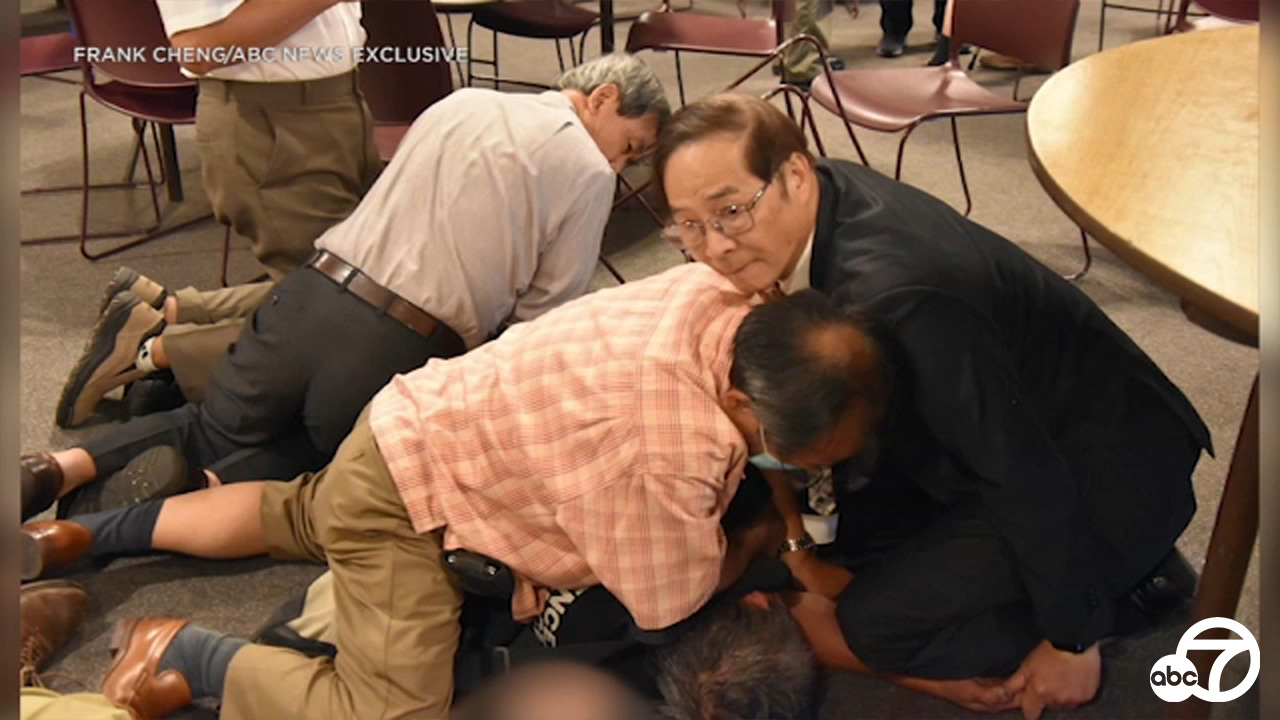 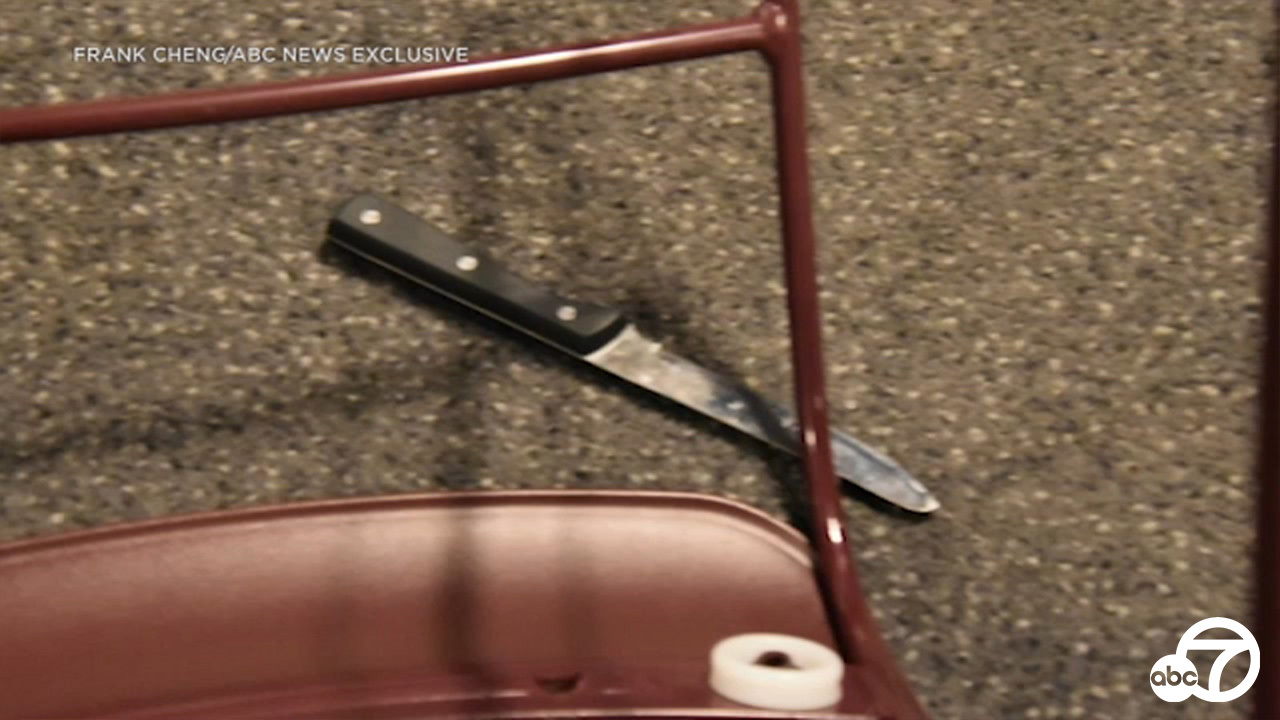 Inside Geneva Presbyterian Church in Orange County moments after a gunman opened fire. Knife seen allegedly brought in by the shooter.

Cheng, who leaves behind a wife and two children, was shot several times during the struggle and died at the scene.

"Without the actions of Dr. Cheng, it is no doubt that there would be numerous additional victims in this crime," Barnes said.

The other injured victims, four men and one woman, were identified as being between the ages of 66 and 92.

They were all taken to local hospitals for treatment -- two of them to Orange County Global Medical Center, which issued a statement Monday on the condition of two of the victims.

"Both patients were admitted to the hospital following treatment in our trauma center. Both are in stable condition, expected to fully recover from their injuries, and discharged in the next 24 to 48 hours," the statement said in part.

According to police, Chou's anger reportedly began when he lived in Taiwan, saying his "anti-Taiwan views" were not accepted. Police said officers found notes in his vehicle indicating his hatred toward Taiwan.

Tensions between China and Taiwan are at the highest in decades, with Beijing stepping up its military harassment by flying fighter jets toward the self-governing island. China has not ruled out force to reunify with Taiwan, which split from the mainland during a civil war in 1949.

In a statement through her office, Taiwan's president, Tsai Ing-wen, condemned the violence and extended her condolences to those killed and injured.

Her office said she also asked Taiwan's chief representative in the U.S., Bi-khim Hsiao, to fly to California to provide assistance.

According to Taiwanese media, Chou had ties to a Chinese-backed organization opposed to Taiwan's independence, although details could not immediately be confirmed.

On Tuesday, several people were seen stopping by the church to drop off flowers.

"I myself am Taiwanese, so I felt just more of a connection to this one, and I felt that I just wanted to do my part to come here to pay my respects and say prayers to those who are affected," said Ruth Cheung.

Other residents like Yuan Li said they're in shock. He said he wants people to reflect on those who matter most, Cheng.

"It shouldn't be like this," he said. "We can have different point of views, but these can be solved in different ways. Not like this. We do feel [Cheng's] the one who should be remembered, not the person who do this terrible thing. We should forget that person."